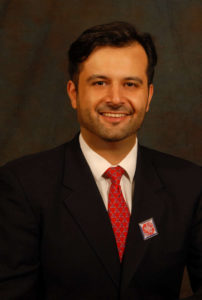 Vienna Town Councilmember Pasha Majdi announced that he is joining the race for the mayor’s seat in the spring election.

Majdi was first elected to the council in 2014 after serving on the Town Business Liaison Committee, according to his town bio.

So far, Majdi is competing against councilmembers Linda Colbert and Howard Springsteen, who announced their campaigns at the first Town Council meeting of the year.

“I’m running for mayor because Vienna is my hometown and I want to keep it a small town,” Majdi said in a statement. “Vienna should be an independent, green oasis that is a sharp contrast to Tysons, not a housing district for Tysons.”

More from the statement:

My vision for the next 10 years is to protect residential neighborhoods and streets to keep Vienna the best place to raise a family in Northern Virginia, apply smart growth principles for Maple Avenue that control and mitigate traffic, and build a Town square around Church Street and the W&OD trail.

The terms for both Majdi and Colbert expire in June this year, while Springsteen’s term expires in June 2021.

Laurie DiRocco, who has been the town’s mayor since 2014, announced in December that she will not seek re-election.

The Vienna election is May 5.