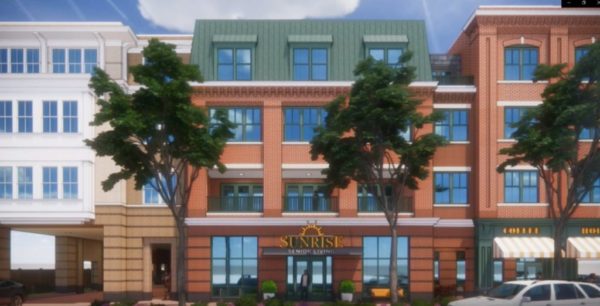 Plans to turn a previously approved mixed-use development into a Sunrise Senior Living Facility are set to head to the Vienna Town Council next week.

Sunrise wants to open an assisted living facility at 380 Maple Avenue — the site of an approved redevelopment for multi-family condos — after the Vienna Town Council killed plans last year for a Sunrise facility farther up Maple Avenue.

The former plans for both projects faced backlash. Sunrise’s original plans for a site at the corner of Maple Avenue and Center Street received a myriad of concerns from residents and councilmembers over parking, retail space and the downtown location.

Meanwhile, residents questioned if the town had properly notified Fairfax County about the proposed rezoning (which it hadn’t) and raised safety concerns about the narrowing of Wade Hampton Drive for the condos at 380 Maple Avenue.

But with the two projects now looking to combine, Dennis Rice, the owner and developer at 380 Maple Avenue, has said that having the assisted living facility on his site could address neighbors’ lingering concerns.

The council will hold a public hearing on the plans on Monday night (Jan. 27). The meeting starts at 8 p.m. at Town Hall (127 S. Center Street).