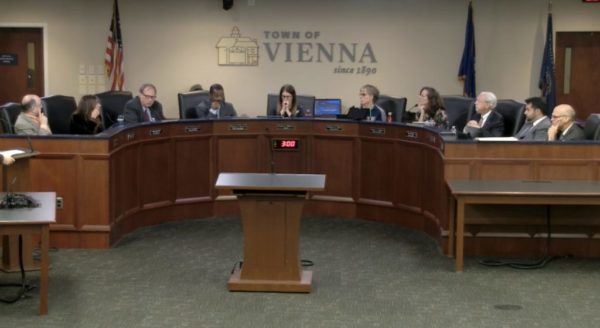 The Vienna Town Council has delayed consideration of giving up certain alleys due to concerns over buffers between residential and commercial areas.

Earlier this week, the council was set to vote on requests for alley vacation for property adjacent to 108-110 Church Street NE and behind 207 Center Street N.

Mayor Laurie DiRocco said at the meeting on Monday that the town staff does not need the land for public use. However, several council members raised objection to considering the fate of the alleys.

“People are upset about development and they want to see some buffers,” Councilmember Howard Springsteen said. “Do we want to give up these buffers?”

The conversation about buffers recently ignited when Wawa cut down trees it wasn’t supposed to. Residents said the trees would have been a buffer between the residential area and the upcoming store at 245 Maple Avenue W.

“I’m really reluctant to give up alleys right now,” Springsteen said, saying that the Wawa incident has raised issues about having buffers between commercial and residential areas.

Town Attorney Steven Briglia urged a delay on the vote to allow for more time to discover the property records for the alleys.

“Some of the old alleys, we’re not sure how we got them,” Briglia said.

“We don’t have a plan or idea of how or to what extent in what manner any given alley or easement is specifically useful to the Town of Vienna in whole,” Councilmember Douglas Noble said.

Noble said that the town needs a systematic approach for retaining or selling the undeveloped sections of right-of-way.

“We need to have a larger conversation about this before we start knocking off one property here, one property there,” Noble said.

Councilmember Pasha Majdi requested that the council postpone the proposal until after Town Manager Mercury Payton provides an update on an internal review about communication with residents about construction incidents.