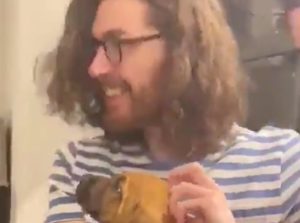 Before and after Hozier’s show at The Anthem in D.C., the “Take Me to Church” singer and his band were backstage playing with puppies from Wolf Trap Animal Rescue.

The local animal rescue, which has a mailing address in Merrifield and remote locations across the country, is a nonprofit that works to transport, foster and adopt rescued puppies and kittens at risk of euthanasia by states in the South.

About a year ago, Wolf Trap Animal Rescue (WTAR) created a puppy therapy program, which helps to lower humans’ stress and increase their endorphins, Sarah Barker, the foster and volunteer coordinator for WTAR, told Tysons Reporter.

Lizzo’s performance at The Anthem in September was the first time that WTAR partnered with the D.C. music venue to bring its puppy therapy program to performers. Since then, WTAR has brought its puppy therapy to about half a dozen artists, Barker said.

“It’s nice to see these people who get so stressed to play with puppies,” Barker said.

When Andrew John Hozier-Byrne, known professionally as Hozier, came to perform at The Anthem last Monday (Nov. 18), representatives at the D.C. music venue suggested that WTAR bring its puppies back.

Barker said that Hozier and his band weren’t told about the puppies until after their soundcheck. They spent about an hour with the puppies both before and after the show, she said.

Hozier tweeted about the experience: “Thanks to the Wolf Trap Animal Rescue for introducing us to these beautiful pups. Please check them out if you’re in the DC area and looking to give a dog a home for life!”

Thanks to the Wolf Trap Animal Rescue for introducing us to these beautiful pups. Please check them out if you’re in the DC area and looking to give a dog a home for life! pic.twitter.com/P7I1umdZid

WTAR also offers the program to corporations via donations that determine how many puppies they will bring.

For small events — like the Hozier one — Barker said WTAR will bring about four to five dogs, while a larger event can have up to 20.

For people who want to feel like a celebrity playing with puppies, WTAR will be bringing the puppies to Tysons Corner Center on Tuesday (Dec. 3) 4:30-7 p.m.

The animal rescue is also set to have its last adoption event of the year at the PetSmart (8204 Leesburg Pike) in Tysons at 11 a.m. on Saturday, Dec. 7.