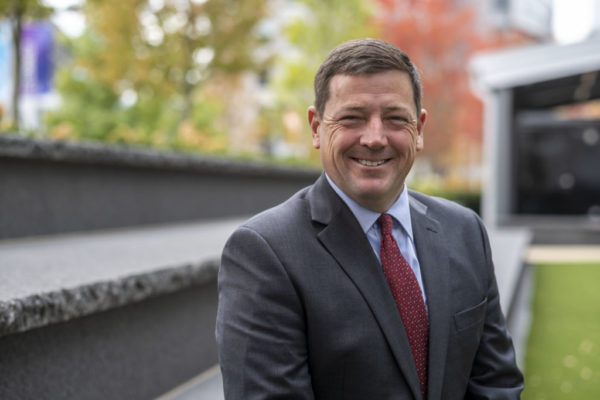 Editor’s Note — Tysons Reporter is running Q&As with the candidates running for the Dranesville and Providence District seats on the Fairfax County Board of Supervisors this week. The stories have been lightly condensed and edited for clarity.

Featured here is Ed Martin, who is running as a Republican against Democrat John Foust for the Dranesville District seat, which represents McLean, Great Falls, Herndon and portions of Vienna and Falls Church.

Ed Martin is a radio host, president of a conservative think tank and Great Falls resident. Now, he wants to become the Dranesville District Supervisor.

Originally from New Jersey, Martin has worked as a lawyer and headed up the Human Rights Office for the Archdiocese of St. Louis from 1998-2001, he told Tysons Reporter.

Fascinated by President Donald Trump’s tweets, Martin wanted to write a book about them and ended up teaming up with an artist to create three Trump coloring books featuring the president’s tweets.

He now runs Phyllis Schlafly Eagles, a conservative group named after the controversial social leader known for opposing the Equal Rights Amendment. Martin moved to Great Falls shortly after the 2016 election, he said.

Tysons Reporter met up with Martin to talk about how he would want to help seniors age in place and address capacity issues at public schools in the county if elected to the Board of Supervisors.

Tysons Reporter: What are your top three goals to help people age in place?

Ed Martin: My wife is a geriatrics physician so her specialty is seniors, so for 15 years I’ve been hearing from her the details of what they call the “grey tsunami” — it’s the number of people who are in the Baby Boomer generation that will age out.

One observation, broadly, is there is a growing — especially in government — distrust in what’s happening. More transparency in what is going on is more important than ever. The second thing, the taxes have gone up, up, up. I think the taxes are too high. I think we need to lower the cost of taxes.

The top one I would describe now is the cost of living here. It’s not just for seniors by the way. If you talk to the cops — and the cops endorsed me, one of the PBAs endorsed — those guys and gals are telling you they can’t live here. They can’t afford to live in Fairfax County. That’s a big one, I would say the taxes.

What’s the vision for development here? How do you put together the pieces that let people move? I think we have a wonderful community [in] Fairfax County, especially in Dranesville District, has some incredible strengths and volunteers and pockets of communities, churches and synagogues that want to do things — how do you build that together?

In Great Falls there’s a center that has come together to support seniors. That’s got to happen more. We need creative solutions. I think that’s going to include the possibility of ride-sharing so that more people can stay.

TR: How would you address affordable housing in the county?

Martin: The biggest thing I think helps with affordability is lowering taxes and the costs. That would be the number one thing. I would say the number one thing is to lower the cost of living here, whether that’s for a cop and his family or an individual. And that’s the best way I know how to do that is to cut taxes, lower cuts, cut regulatory costs and the schools are what draw people here.

They are willing to tolerate some of the high real estate prices because the schools are so good in the Dranesville District, so I think that’s the biggest concern people have now. How can I trust to move there if we’re having something that looks like boundary changes — what does that mean? Confidence in the school system is going to be really important.

TR: What do you think about developers setting aside units for workforce housing and contributing to the county’s housing fund?

Martin: I’m a little bit cynical of set-asides. I would like to see how well they work. I don’t believe they work as well as we’re told. They tend to be window dressing for everyone to feel good.

TR: More broadly — not just about McLean High School — how would you want to address capacity issues here in Fairfax County both before it’s an issue and once a school is over capacity?

It’s how you spend money that makes a difference. So if you look at spending priorities and you say, “Why hasn’t McLean High School had whatever could be done to eliminate the many trailers?” — whether it means a building project, whether it means expanding the existing school — we should have been doing that instead of spending money on everything else.

Fairfax County is not broke. I think we’re misspending our money.

TR: What do you think of the electric school bus idea?

Martin: I don’t know enough about the cost of it. I’m not against electric cars or electric buses if they work. I know sometimes the cost of something can be deceptively cheaper on the front end — it looks like it’s going to save you — I don’t think I know enough. I like the idea of electric cars. The good old fashioned buses work pretty well.

TR: Do you have any plans to encourage wind and solar power use among constituents and if so, how?

Martin: I think wind and solar [power are] fine. I would not be in favor of incentivizing with either taxes or anything like that. Dominion gets a bad rap for not succeeding in a variety of ways, but they have to be a partner going forward. I think that’s a different question.

Over time you need to find partnerships where things can be creatively done and I think Dominion could make some things more likely in terms of renewables. I think it’s fine to encourage people.

TR: What are your top three transit infrastructure priorities?

Martin: The number one is to get a grasp on what’s happening in Tysons because it’s impacting Dranesville.

I think the Leesburg Pike has to be addressed more significantly. If I could those two together, you hear people complain about the Georgetown Pike and some of it’s a windy road and will be forever, but some of it around the Great Falls Park is because in the summer the park is full up.

I think the third issue is what is the future going to be? I mean we have a problem that’s a wonderful blessing with these businesses moving in and the people moving in, but I don’t think we really understand the scope of the problem. I think we have to be creative. It might mean there’s more ride-sharing — I’m a sort of fan of watching the market disrupt through Uber and Lyft and all — but coming up with how to alleviate traffic congestion in the district.