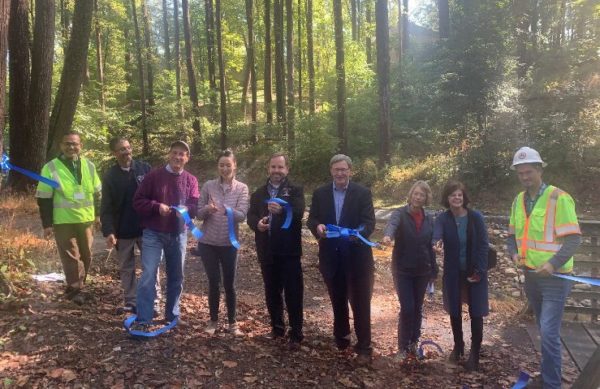 Restoration recently finished on a stream in McLean as part of Fairfax County’s larger efforts to improve water quality and reduce flooding.

Restoration started at Bull Neck Run, a stream just north of Tysons, in 2018 and included improving the ecological function of the stream and extracting nitrogen and phosphorous from the soil.

Before the project, the banks of the stream were eroding and the stream bed was identified as instable.

“Projects like this will help ensure the health of our watersheds for generations to come and I look forward to continue working with the community on these improvements,” Foust said in a press release.

The project cost $1.6 million and was funded through the county’s stormwater service district.

Lewinsville Coalition, a local advocacy group, provided input during the project’s design and construction, along with pushing for trails to stay open while work was underway, according to a press release from Foust.

“The work involved restoration of approximately 2,000 linear feet of Bull Neck Run and several tributaries and will remove 800 pounds of nitrogen and 71,000 pounds of suspended solids per
year,” according to the press release.

Work to restore the native trees along with other landscaping is expected to wrap up next month.

The project is the latest stormwater project completed.

Upcoming projects include the restoration of Dead Run toward Georgetown Pike and work on Tucker Avenue in Falls Church.