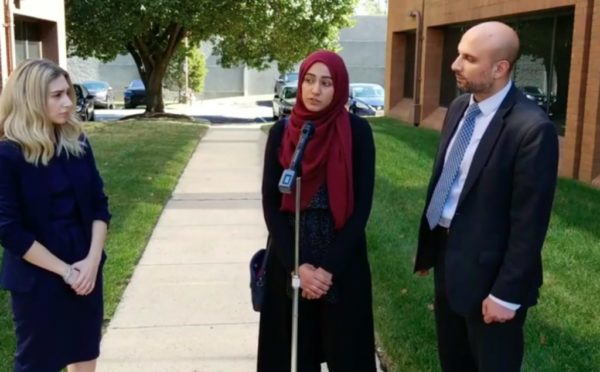 A Muslim woman is suing a Merrifield-based company, claiming that she was denied employment because of her faith.

Shahin Indorewala said she applied for a job at Fast Trak Inc. (2735 Hartland Road, Suite) last fall. The interview process was going well, she said in announcing the federal suit this week, but things allegedly went south when discussing prayer breaks with the company’s CEO.

The Council on American-Islamic Relations (CAIR) filed the discrimination lawsuit Tuesday (Sept. 24) in U.S. District Court for the Eastern District of Virginia. Indorewala and her attorneys are seeking a jury trial.

CAIR Attorney Gadeir Abbas told Tysons Reporter that Fast Trak will have about a month to respond to the lawsuit.

Fast Trak CEO Ramses Gavilondo told the Associated Press that he didn’t hire Indorewala because she “wanted to preach her religion” and that the Equal Employment Opportunity Commission investigated and found no wrongdoing. Fast Trak has so far not responded to Tysons Reporter’s requests for comment.

END_OF_DOCUMENT_TOKEN_TO_BE_REPLACED

More Stories
Where to Celebrate the Last Days of Oktoberfest Around TysonsJUST IN: New Haycock ES Principal Placed on Leave