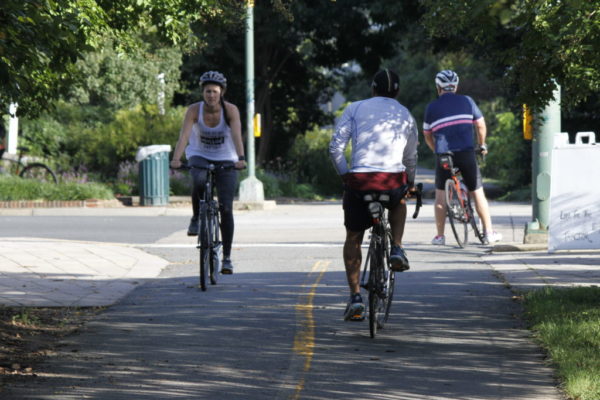 How do you bike from Tysons to Reston? One person took to Twitter to ask that very question on Friday (Sept. 20).

While most of the tweets said the Washington and Old Dominion Trail is the way to go to, several people shared different routes for getting to the trail.

One person recommended that cyclists head from Leesburg Pike (Route 7) to Gallows Road down to the W&OD Trail. The trail follows Piney Branch Stream from Vienna to Difficult Run River, before heading north to Plaza America and Reston Town Center in Reston.

For cyclists who don’t want to head that far south, another person recommended a route behind Walmart (1500 B Cornerside Blvd) by the Spring Hill Metro station that connects to the W&OD Trail.

Another person suggested the new Vesper Trail, which runs through the Old Courthouse Spring Branch Stream Valley Park as another way to get to the W&OD Trail.

Get to Route 7 and Gallows and take Gallows down all the way to the W&OD trail; most of Gallows will have an unprotected bike lane, which definitely helps. You then take the trail all the way to downtown Reston. Not sure if I would do a CaBi for this ride, but to each his own.

Darn — I had adjusted that map to match my preferred commute but when I shared it, it defaulted back to google’s recommended bike route. The google way is flatter, has many more turns, and uses the brand new short Vesper Trail. I suppose on a CaBi, the flatness would be helpful.

Tysons has some changes underway aiming to make the area more bikeable and walkable.

The Route 7 Corridor Improvements Project plans to add paths between Reston and Tysons. Meanwhile in Tysons, the Jones Branch Connector is slated to open this fall, connecting the Tysons East and North Central neighborhoods.

For cyclists looking to rent bikes, Capital Bikeshare has brought more than a dozen bike-share docks to Tysons.