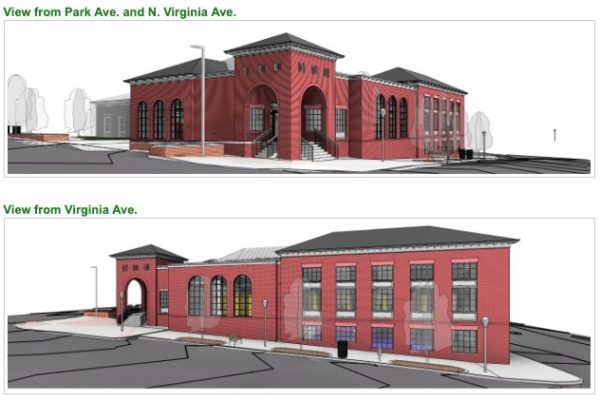 The Mary Riley Styles Public Library in Falls Church is reporting $2 million in unforeseen expenses for its upcoming renovation project.

The city is working to revamp the history room and add 3,174 square feet, along with new features to the aging Mary Riley Styles Public Library (120 N. Virginia Avenue). Voters approved the estimated $8.3 million budget in fall 2016.

Currently, the total estimated budget for the project is $10.8 million and has a shortfall of $2.1 million, Project Manager Joel Timmins said.

Mark Manetti from BKV Group said that the upgraded library will be about two points short of receiving LEED Silver certification and that the team might need to purchase off-site credits to reach the 50-point minimum.

“To spend that kind of money to buy off-site credits is kind of anathema. Are there things we could do here to achieve LEED Silver?” Councilmember Dan Sze said. “Is it more tinkling with the HVAC? Is it more insulation?”

“I would have a preference to on-site energy reductions, efficiencies, et cetera as opposed to buying off-site credits,” Mayor David Tarter said.

Timmins said that the city’s Planning Commission said that the project needs a streetscape and the arborist recommended irrigation, which added costs.

Manetti added that the team didn’t realize initially that the project would need a streetscape design.

City Manager Wyatt Shields said that the library’s board and staff were primarily focused on the library when determining the original budget estimates for the project.

“I should have raised my hand and said we need to expand this to do the full site and the streetscape,” Shields said.

Shields added that he should have escalated the consultant’s estimate in 2014.

“Working with a 2014 number is difficult and not realistic or practical,” Shields said.

“What we asked the voters to approve for this particular project for generally what we wanted to do both in terms of expanding square footage and all of the stuff that comes along with it — forget cost escalation, forget tariffs, forget all of that — it just never seemed to comport,” Councilmember Ross Litkenhous said.

Litkenhous said he is frustrated that the referendum for the voters was $8 million instead of a higher number.

“If the referendum had said $12 million or $14 million, it probably still would have passed,” he said. “At the end of the day, there is going to be a cost overrun and it’s going to be significant.”

The total cost should be determined within a few weeks, Timmins said. Construction is slated to start by February. The library is scheduled to reopen March 2021.