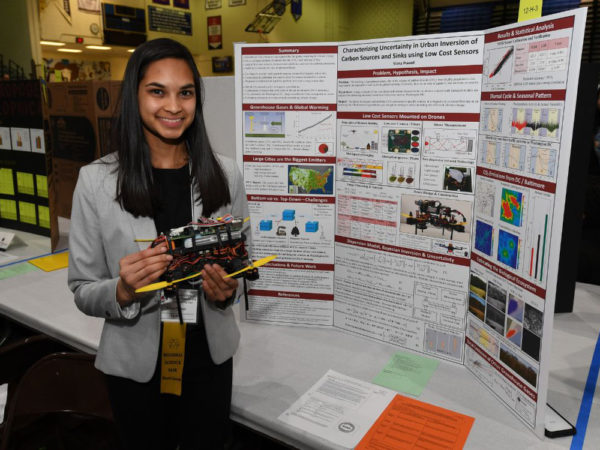 A young Vienna resident is the recipient of a national honor recognizing upcoming leaders in the scientific community.

Siona Prasad recently won the Davidson Fellow Scholarship for her work in environmental science and climate change, which included $25,000 in college tuition assistance at Harvard University, where she began studies this fall.

Leading up to this moment, Prasad said she applied for this award several times in the past and was thrilled when she finally became a recipient.

“My family was very proud and we were all excited about the scholarship,” she said. “It means the world to be recognized for my work.”

She added that being included in the network of other fellows and alumni network is also an honor. Prasad will attend a ceremonial dinner for the award on Sept. 27 in D.C.

The Davidson Scholarship awards young adults age 18 or younger with scholarship money who demonstrate outstanding achievements in the scientific community. Applicants must be either the lead student scientist on a project or conduct it independently, according to the scholarship website.

Throughout her high school career at Thomas Jefferson High School for Science and Technology, she worked with researchers and professors at the University of Maryland to develop low-cost CO2 sensors that were easy to scale and implement in cities.

These sensors can detect where greenhouse gasses are emitted from within city limits and allow the government and environmental research agencies to ultimately combat the effects of climate change, according to a Davidson Institute press release.

“We have less than a decade to solve the biggest environmental crisis we have ever faced,” she said.

Across D.C., Prasad said she was able to install nine sensors on places like telephone polls and collect data that is now in the hands of University of Maryland professors.

Before the project, Prasad said she was always interested in the environment and was particularly motivated when former President Barack Obama’s asked if this generation is doing all they can to prepare a better future in his 2016 State of the Union address. Prasad said she wanted to answer his query with an honest “yes.”

Prasad said she plans to study computer science and environmental science at Harvard, adding that she’s also interested in entrepreneurship and startup companies.

“Technology is one of the most powerful weapons we have against climate change,” Prasad said.