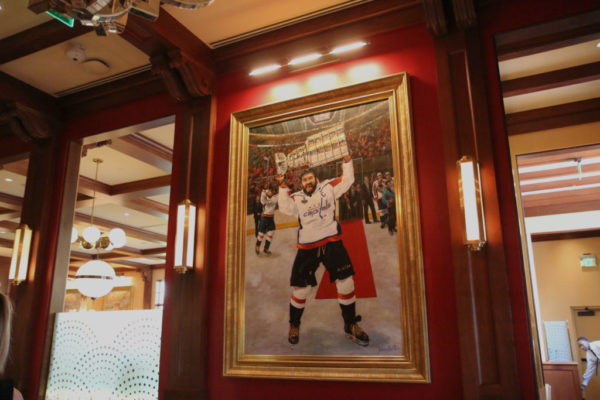 Diners can spot Stanley Cup champ Alexander Ovechkin’s signature on a painting of himself at Randy’s Prime Seafood and Steaks in Tysons.

A spokesperson for the restaurant confirmed to Tysons Reporter that the Washington Capitals captain signed the painting.

The painting — one of five paintings in the restaurant by artist Jack Gable — depicts Ovechkin on the ice holding the Stanley Cup triumphantly above his head.

Randy Norton, the CEO of Great American Restaurants and the restaurant’s namesake, previously told Tysons Reporter that the Ovechkin painting “was the easiest one to pick” when he planned the paintings with the artist.

Norton called the Washington Capitals winning the Stanely Cup last year as “such a wonderful event.”

At Randy’s Prime Seafood and Steaks in Tysons, VA, there is an epic painting of @ovi8 raising the stanleycup. Ovechkin just signed the painting giving his endorsement! Food is pretty delicious too… #ALLCAPS… https://t.co/4G87xSxrPn