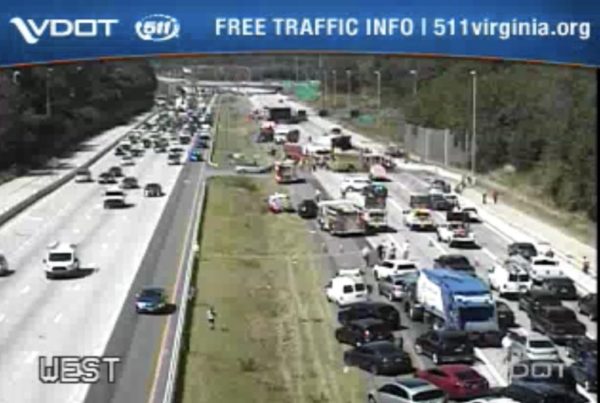 A 28-year-old McLean man was killed in a crash involving multiple vehicles along I-66 near Centreville.

A series of chain-reaction crashes involving five sedans, one SUV, one pick-up truck and a tractor-trailer happened shortly before 11 a.m. on Saturday (Aug. 24) in the westbound lanes of I-66 east of exit 53 for Route 28, according to Virginia State Police.

More from Corinne Geller, a spokesperson for the Virginia State Police:

A 2007 BMW sedan was traveling west on I-66 when it struck the vehicle in front of it. The BMW then collided with a westbound tractor-trailer.

The tractor-trailer then collided with several vehicles, to include a Toyota Rav4, before overturning in the roadway. The Toyota Rav4 ran off the right side of I-66 and over the Jersey wall, at which point it caught fire.

McLean resident Joseph Castellano, who was the driver of the Toyota, died at the scene, Geller said.

His wife, who was a passenger in the car, was flown to a trauma center in D.C. and is still being treated for life-threatening injuries.

The driver of the BMW, 40-year-old Jonathyn Bland of Centerville, was transported to Reston Hospital for minor injuries, along with the driver of the tractor-trailer, 34-year-old Shahbaz Singh of Fairfax, for serious, but non-life threatening injuries, Geller said.

Police charged both Bland and Singh with reckless driving.

“The three other individuals transported to Reston Hospital — one had serious, but non-life threatening injuries and other two suffered minor injuries,” Geller said.