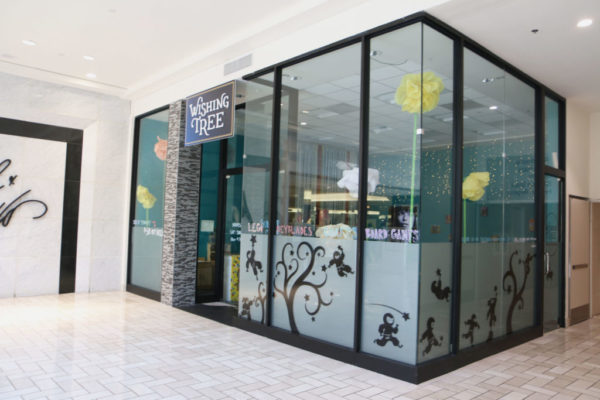 A short-term childcare center that was on a hiatus in Tysons Corner Center has decided not to reopen.

In the spring, Tysons Reporter wrote that Ashburn-based Wishing Tree appeared closed at its spot on the second floor of the mall near Lord & Taylor — the childcare center’s website said it was “reopening in August 2019.”

Now, an employee for Wishing Tree said that the Tysons Corner Center spot was a holiday pop-up that closed sometime around February. Though Wishing Tree had plans to reopen in August, the employee said that it decided not to.

The Tysons Corner spot still has the sign and interior decor, but that won’t last long — the employee said that there are plans to move out of the mall soon.

Writing on the windows indicate that the Tysons location offered Legos, spinning top toys by Beyblades, crafts and board games for kids. When Tysons Reporter peaked through the windows earlier this week, the interior looked sparse and dark.

The Ashburn spot offers care for ages 3-12, according to the website.

Ashley Hopko contributed to this story