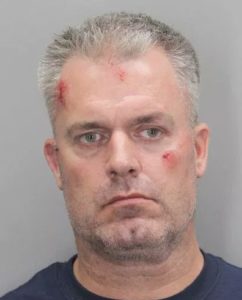 The incident occurred around 11 p.m. in the 8100 block of Old Dominion Drive in McLean.

“The driver of a black Mercedes refused to stop when officers tried to pull him over for driving recklessly,” police said. “The driver intentionally rammed a police cruiser before turning down a dead-end street and running away.”

Police arrested 45-year-old Brian Templeman and charged him with his fourth driving while impaired (DWI) offense, reckless driving, driving on a revoked license, assault on law enforcement and eluding, according to police.