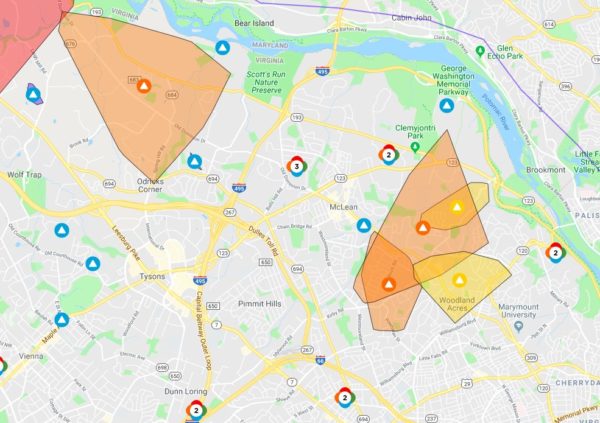 Roughly 4,000 people in McLean have lost power this evening (Wednesday) right after a storm hit the area.

A Dominion Energy map shows five major power outages. One is west of I-495 above Odricks Corner that is affecting 1,076 customers.

The other four are around Old Dominion Road in the Chesterbrook area — the largest of which was caused by a circuit outage and is impacting 1,237 people, according to the map.

Investigations are pending for the three others ones, which, in total, have left a little more than 2,000 people in the dark.

Dominion Energy does not yet have estimated times for when the power will be restored for the outages.

The outages popped up on the map shortly after the National Weather Service issued a Severe Thunderstorm Watch, followed by a storm that quickly passed through the Tysons area shortly after 5 p.m.