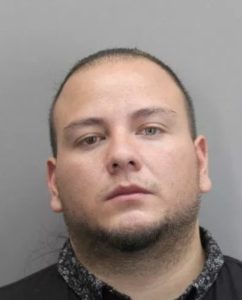 Fairfax County Police arrested a convicted sex offender from Vienna after he tried to attend to enter an elementary school in the Falls Church area.

“While trying to attend a school event with an acquaintance, a man attempted to check into the school using the automated visitor management system, the man’s name was flagged as being on the sex offender registry,” the police report said. “School staff denied him entry into the school and called police.”

Cornejo was arrested and charged with “entering school property after a violent sex offense,” according to police. He is being held at the Adult Detention Center without bond.

According to Virginia’s sex offender registry, a man named Alonso Bruno Cornejo, who lives in Vienna, was convicted in 2011 for sex trafficking of a juvenile.

An FBI press release from 2011 said that Alonso Bruno Cornejo Ormeno was sentenced to 292 months — roughly 24 years — in prison for “sex trafficking runaway females as part of his juvenile prostitution business that serviced clients throughout northern Virginia, as well as Washington, D.C., and Maryland.”