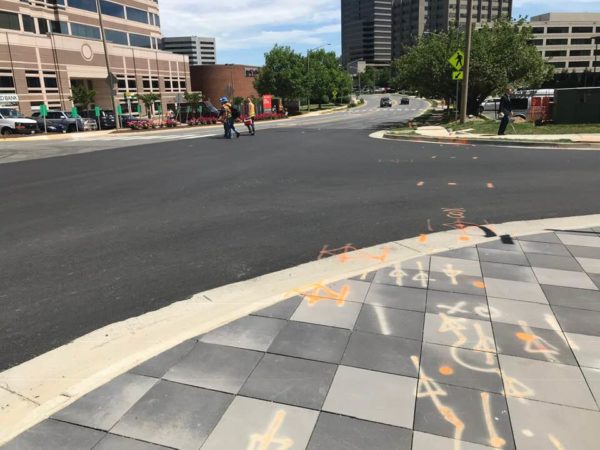 Bicyclists and drivers can expect new lane markings on Greensboro Drive by The Boro development early next month.

Last week, a self-identified cyclist questioned on Twitter when the road would get new striping.

“The new asphalt is nice, but total chaos,” the May 14 tweet said. “[The] eastbound bike lane, second travel lane, and center turn lane [are] all obliterated. And it’s been a few weeks.”

Jennifer McCord, a spokeswoman for the Virginia Department of Transportation, told Tysons Reporter that the roadwork is being completed by a developer under permit.

The developer gave this update on Greensboro Drive via the VDOT spokeswoman:

In addition to the shared lane marking, the signal at the intersection of Westpark and Greensboro drives will be modified and new signals will be installed at Greensboro’s intersection with Spring Hill Road and Solutions Drive, the spokeswoman said.

“The contractor plans to mill and overlay Greensboro and Westpark the weeks of May 28 and June 3; then pavement markings will be placed relative to the bike lane from Westpark to Solutions,” McCord wrote in an email.

Drivers and bicyclists can expect temporary markings until the signal construction is complete. Once the work on the signals finishes, Greensboro Drive will then welcome new permanent markings, McCord said.

Hey @VaDOTNOVA is there a striping plan/timetable for Greensboro Dr in #Tysons? The new asphalt is nice, but its TOTAL CHAOS. Eastbound #bikelane, 2nd travel lane, and center turn lane all obliterated. And it's been a few weeks. Thanks! pic.twitter.com/B0oFCbUOEh