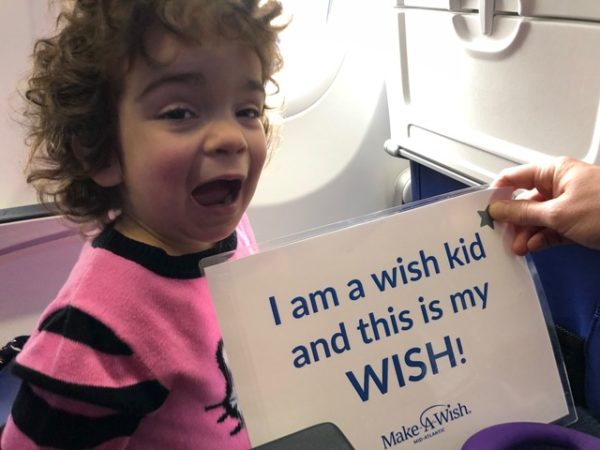 A dream trip came true for a young girl from Falls Church because of the Make-A-Wish Foundation’s Mid-Atlantic chapter.

Three-year-old Kathryn had a bone marrow transplant last year and wished to go to the Walt Disney World Resort. Earlier this year, she headed to Orlando to meet in person some of her favorite characters from the Disney Junior network.

“Her favorite show is Mickey Mouse Clubhouse, and she likes to repeat lines, sing along and dance while she watches the characters on TV,” Make-A-Wish Mid-Atlantic wrote to Tysons Reporter. “She was thrilled to meet Mickey Mouse three separate times on her trip, and she had a blast going on rides at the parks.”

Kathryn and her family stayed at the Give Kids The World Village, a resort for kids with critical illnesses and their families. While there, Kathryn celebrated her favorite holiday during the resort’s weekly Halloween night on Mondays in the middle of January. She also visited the Wizarding World of Harry Potter and practiced doing “magic” with her new wand at Universal Orlando.

“The wish transformed Kathryn’s life by giving her the opportunity to leave behind the stress of dealing with a critical illness and just enjoy being a kid,” according to Make-A-Wish Mid-Atlantic.