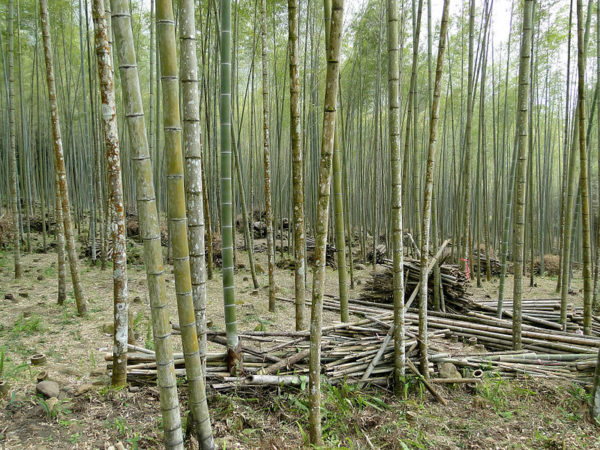 Bamboo may be a favorite of pandas and homeowners looking for a screen around their property — but it’s also an invasive species that can quickly grow out of control, and Fairfax County is struggling to figure out what to do about it.

An effort led in part by Providence District Supervisor Linda Smyth is examining what to do about bamboo in Fairfax County. According to Jack Weyant, director of the Department of Code Compliance, the county is putting together an educational flyer to let homeowners know about the risks of bamboo, but is also in the first stages of considering more stringent ordinances.

The plant was first introduced to the Mid-Atlantic region in 1882 as an ornamental decoration. Sprouts of the plant can grow 12 inches a day and roots can travel 20 feet away from the original clump, according to the Master Gardeners of Northern Virginia.

Patches of wild bamboo can be found throughout the county, including the Pimmit Run Trail in McLean.

The plants can dominate sites, creating a monoculture that can crowd out and ultimately displace native vegetation. The plant can cause extensive property damage to decks, pool liners or even building foundations.

Getting rid of bamboo is far more difficult than growing it. Justin Roberson with the Fairfax County Park Authority said the best way of eliminating bamboo is to cut down the shoots and treat the stumps with herbicide, a process that needs to be repeated over multiple growing seasons. Digging into the ground and breaking up the roots could make the problem worse and spread the plant even further.

In 2017, the Virginia General Assembly passed legislation authorizing localities to regulate bamboo to existing ordinances regulating grass. The code specifies that the bamboo being regulated is any type characterized by “aggressive spreading behavior.”

Current Fairfax County code regulates grass height to not exceed 12 inches, but whether or not Fairfax County opts to regulate bamboo the same way is still up for consideration.

At an environmental committee meeting on Feb. 12, Weyant said locations around the country have a variety of approaches, from requiring property owners to maintain or contain bamboo to a full-on ban that requires owners of existing bamboo to get rid of it.

So far, Weyant said Fairfax has focused on education and has a flyer in the works explaining the hazards of the plant that will be ready for release sometime within a month. But the county is looking at how a hypothetical bamboo ordinance could be put into place.

“Any potential ordinance would be complaint-driven,” said Weyant. “We need to talk about whether or not to prohibit the planting of new bamboo and how to enforce that. We could allow it to remain but require the property owner to maintain it and we could issue violations to someone who we did get a complaint.”

Running enforcement for bamboo complaints could be complicated and costly, and according to staff documents, there are concerns the fines imposed as penalties to violators would not be significant enough to support the inspection and enforcement process. There are also risks that control of bamboo could lead to unintended damage to the nearby trees, which efforts to remove invasive plants are designed to protect in the first place.

“The last thing we want to make clear is that don’t want to get the county into taking measures to remove bamboo such as we do with a grass ordinance,” said Weyant.

Mason District Supervisor Penelope Gross, chair of the environmental committee, said the county would continue with education and move into regulations only if necessary.

“This is a thorny one to try and address,” said Gross. “Going to education is often the first and least onerous approach. Let’s do the education and see what happens.”

Photo via City of Fairfax