For all its faults, it’s hard to say Tycon Courthouse doesn’t stand out.

More locally known as the “Toilet Bowl” or “Stargate” building, Tycon Courthouse on Route 123 just west of Leesburg Pike is most notable for it’s over seven-story tall ring in the front of the building.

But there was a time where the building, labeled the ugliest in Virginia in Business Insider’s 2018 list of ugliest buildings in every state, was once the height of local architecture. It was, at one point, the largest office building in Tysons and the first structure to include massive structure parking, able to accommodate a then-record 900 cars. 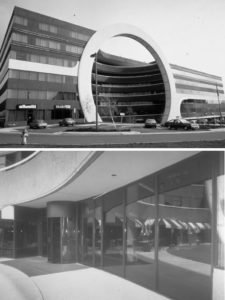 It was built in 1983 in the middle of a “screaming architecture” fad — a Washington Post article at the time said the buildings were designed to be their own advertisements. They were reflective of peak Reagan-era style, where notability was more important than pleasing aesthetics. Architects Volker Zinser and Barry Dunn were credited with the project.

There are several urban rumors about the project, like that it was designed to look like an “O” for the Olivetti Company, or the lenses of a Nikon camera, but an interview with Zinser at the time said he was inspired by a book about 19th-century French architects who designed projects that explored geometric volumes.

In keeping with the style, Zinser said the fact that the building was being talked about was more important than what people were calling it.

The screaming architecture fad was centered around Fairfax County. Experts at the time called it medieval, noting that businesses were grabbing spaces and turning them into private fortresses.

The Blade Runner-esque Tysons Office Center on Route 7 and Gallows Road, sometimes called the “Flash Cube” building, and Tycon Towers, the 17-story “shopping bag,” were other local examples of this design.

Tycon Courthouse in the 1980s photo via Bonstra Haresign Architects