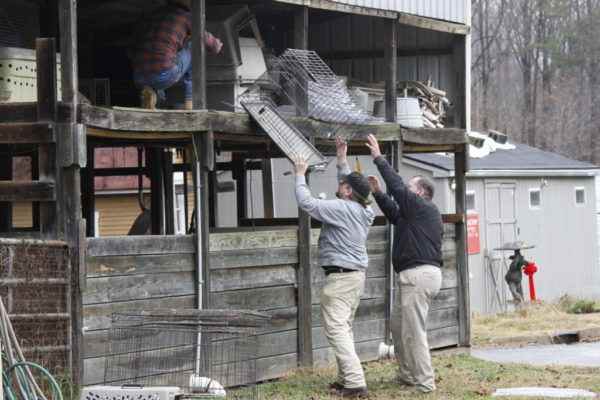 (Updated 9:30 a.m.) After a protracted battle with the National Park Service, Claude Moore Farm in McLean closed last year. While the lot currently sits fenced off, it’s still unclear what will happen to the farm next.

In December, the park service released a statement saying discussions on the park would begin in early 2019.

Early in the new year, the NPS will invite the community, the farm’s volunteers and any interested parties to share their vision for the park’s future. The public engagement process will help to determine what happens next and when. The NPS will listen to people’s ideas about how they would like to enjoy the park. Should the NPS offer farm activities, return the area to its natural state, provide connections to neighboring trail systems or something else altogether? The NPS will not pursue any kind of commercial development or sell the property.

But a month and a half into 2019, NPS representatives say no concrete plans for those meetings have been made yet.

“We look forward to beginning public engagement in the coming months,” said Jenny Anzelmo-Sarles, chief of public affairs for the NPS National Capital Region. “Since [December], our agreement has expired and we are actively working with the Friends organization on a safe and orderly close out, which includes the Friends removing personal property from the park.”

The NPS and the organization that managed the park, Friends of Claude Moore Colonial Farm, had a long history of sparring over administrative and financial oversight. A 2015 report demanding more oversight at the farm started the final round of conflict between the two organizations that ended with the NPS shuttering the park for good at the end of 2018.

But even if the NPS has nothing planned, the McLean Citizens Association said at a board of directors meeting on Wednesday that they are going to begin considering suggestions for new uses for Claude Moore Farm.

“The [farm] has closed, but members will plan to walk that space and look at the layout to consider potential uses,” said Ed Monroe, chair of the group’s Environment, Parks & Recreation Committee. “So if you have things you want to share, we’re open to receiving those.”