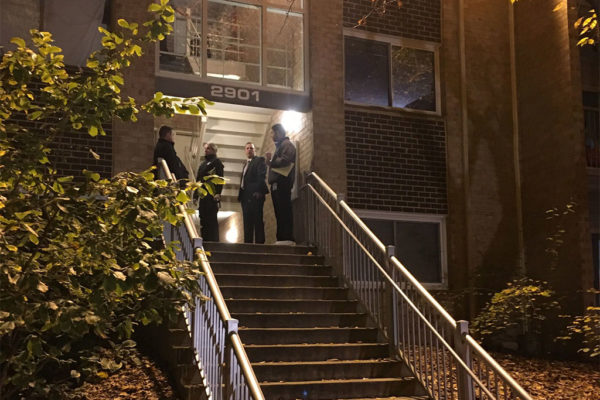 An early morning altercation ended in a homicide on the 2900 block of Charing Cross Road, just east of the Mosaic District, according to Fairfax County Police.

Oscar Daniel Diaz Fuentes, 27, was stabbed in the torso this morning (Wednesday) around 1 a.m. during a domestic dispute. He was taken to a hospital where he was pronounced dead.

The suspect, Jose Adalberto Vasquez Hernandez, lived in the apartment with Fuentes. Hernandez was Fuentes’ mother’s boyfriend and, following an argument, Hernandez left and returned later to stab Fuentes, police said. Hernandez was arrested at the scene.

“It’s still early in the investigation, and detectives from our Major Crimes Bureau and Crime Scene Section continue to process the scene and interview the involved parties,” FCPD noted.

The 27-year-old victim was taken to the hospital w/ a stab wound around one this morning. We’re still working to confirm the suspects identity, he didn’t have an ID on him when he was taken into custody. Both the victim and suspect lived in the apartment. https://t.co/JRpaq0GK9p