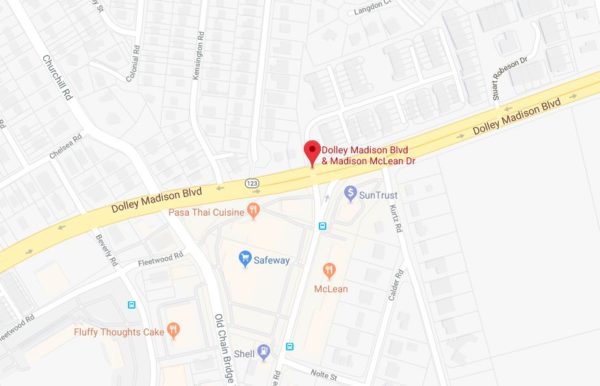 A 75-year-old McLean man was struck by a car and killed last night near the intersection of Route 123 and Chain Bridge Road.

Police say Philip Dietz was crossing Route 123 just before 10 p.m. when he was struck by a driver in a BMW heading southbound. He died from his injuries.

All southbound lanes of Route 123 were closed for an extended period of time last night while a crash reconstruction team worked to investigate the collision, according to VDOT.

Crash Reconstruction Unit detectives are investigating a fatal crash involving a pedestrian in the intersection of Dolley Madison Boulevard and Madison McLean Drive. Philip John Dietz, 75, of McLean, was attempting to cross Dolley Madison Boulevard around 9:55 last night. The driver of a 2002 BMW was traveling southbound in the right lane of Dolley Madison Boulevard when he hit Dietz in the intersection. Investigators are working to determine if Dietz used the marked crosswalk with the pedestrian signal at the time of the crash. Speed and alcohol do not appear to be factors for anyone involved. The driver remained at the scene and was taken to the hospital with non-life-threatening injuries. Once the investigation is complete, the Office of the Commonwealth Attorney will review the case and determine if the driver will be charged.