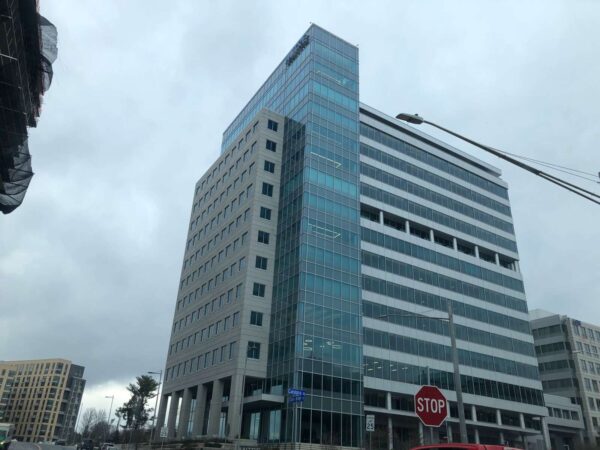 (Updated at 9 a.m.) Bill Ending School Mask Mandates Signed — Gov. Glenn Youngkin signed legislation yesterday (Wednesday) letting parents opt their children out of mask requirements, adding an emergency clause that sets a deadline of March 1. Fairfax County Public Schools said in a statement to Tysons Reporter that it’s reviewing what this means for the district, which sued to keep its mandate. [Patch]

Wind Advisory Takes Effect Tonight — The National Weather Service has issued a Wind Advisory for Northern Virginia, including Fairfax County, that will be in effect from 10 p.m. today (Thursday) to 10 a.m. tomorrow. The alert warns that winds could reach 20 to 30 miles per hour with gusts of up to 50 miles per hour, potentially blowing down tree limbs and creating power outages. [NWS]

Tysons Area Schools to Hold Graduations in D.C. — Langley, Madison, Marshall, and McLean high schools will have graduation ceremonies at DAR Constitution Hall on May 31 and June 1 after the events were previously moved due to D.C.’s COVID-19 vaccine requirement, which ended Tuesday (Feb. 15). FCPS said the rule “would have prevented a number of students and families from attending.” [WTOP]

Seven Corners to Get New Fire Station — Fire Station 28 personnel moved to temporary quarters yesterday as Fairfax County prepares to tear the existing station down and build a new one in its place. The new building will have two levels and 13,500 square feet of space, and the current estimated occupancy is mid-2024. [FCFRD/Twitter]

Vienna Inn Named Top 10 “Lovable” Dive Bar — DC Eater ranked the longtime Town of Vienna staple as the 10th most lovable dive bar in the D.C. area: “Around since 1960, this Northern Virginia neighborhood institution is famous for its chili dogs and its convivial vibe. During the pandemic, the chill bar debuted curbside takeout, delivery, and heated outdoor seating.” [DC Eater]

From the outside, the office towers at 6400 and 6402 Arlington Boulevard look much the same as they did half a century ago.

At 13 stories tall, they still loom over Route 50 as it approaches Seven Corners and still boast striking black-and-white facades that draw the attention of passing drivers while revealing little about their occupants.

Inside, however, property owner BoundTrain Real Estate has been busy overhauling both buildings from their lobbies to the top floor that once housed offices for executives of First Virginia Banks, which built 6400 Arlington Boulevard — now dubbed the South Tower — as its headquarters in 1972.

6402 Arlington — the North Tower — came later in 1987, according to Fairfax County property records.

Formerly known as the Falls Church Corporate Center, the buildings have been rebranded as Lookout at 6400 as part of a $11 million renovation project that BoundTrain hopes will revitalize the site for an office market transformed by the rise of remote work during the COVID-19 pandemic.

“Lookout is a pretty good indicator on front-end demand people coming back to the office because of that value proposition,” BoundTrain Managing Principal Michael Klein told Tysons Reporter. “…Rent is still important. Economics are still important, but most tenants still want amenities.”

BoundTrain bought the 410,197 square-foot office complex for $38.1 million in February 2019 with the goal of modernizing it.

At that time, the towers were over 70% leased, but dated interiors, deferred maintenance, and a lack of amenities had turned them into a “broken asset,” Klein says. Interviews with tenants indicated they had stayed because the location is convenient for commuting.

However, the real estate company saw potential in the buildings, adopting the name Lookout at 6400 in reference to the 360-degree panoramic views they provided of Northern Virginia into D.C.

To take advantage of those views, BoundTrain gutted the former Virginia First Bank executive floor at the top of the South Tower and installed a 3,000 square-foot tenant lounge that retained one of two existing fireplaces but was otherwise entirely redone.

Other amenities introduced since work on the renovation started in September 2019 include a new roof, conference rooms, a 5,000 square-foot fitness center with a bicycle room, a wellness room, and a revamped ground floor that has a separate lobby and elevator for medical uses. END_OF_DOCUMENT_TOKEN_TO_BE_REPLACED 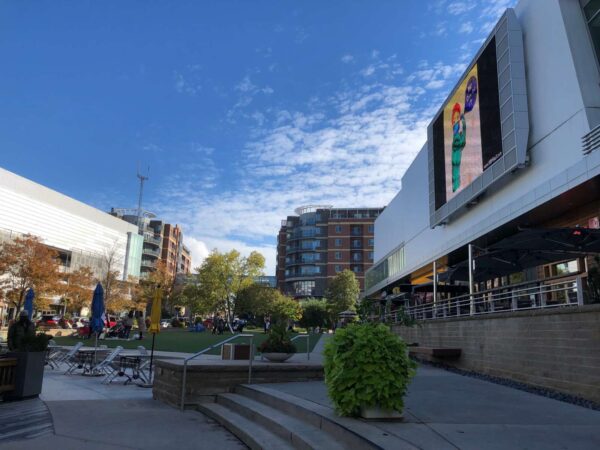 Woman Dies After Seven Corners Crash — Alexandria resident Maria Pascoe died on Oct. 15 from injuries sustained in a two-vehicle crash that occurred in Seven Corners at 9:27 a.m. on Sept. 29. Fairfax County has seen 14 non-pedestrian deaths from traffic incidents so far this year, compared to 10 over the same time period in 2020. [FCPD]

How to Celebrate Diwali Safely — The Fairfax County Health Department encourages people who celebrate Diwali, the Hindu festival of lights, by gathering virtually, with members of their household, or outdoors. While festivities last for five days, Diwali itself takes place today (Thursday), with participants performing a Lakshmi Puja ritual to bring good health and fortune in the new year. [FCHD]

Spring Hill Apartment Building Sold — “Greystar sold the 404-unit Ascent apartment building in McLean for $150.5 million in a transaction that closed Oct. 1, according to Fairfax County records. An affiliate of Brookfield Properties was the buyer…Brookfield has begun marketing the property by its address, 8421 Broad, with rents that start at $1,900 a month.” [Washington Business Journal]

County to Hold Town Halls on Parking Changes — Fairfax County will hold four virtual town hall meetings starting on Monday (Nov. 8) to discuss its “Parking Reimagined” initiative, the first full review of the county’s rates and regulations for off-street parking in more than 30 years. The review will include an “extensive analysis” of parking supply and demand as well as local, regional, and even national trends. [Fairfax County Government]

Vienna Police Awarded for Saving Life — “About this time last year, George Hunt went into cardiac arrest and collapsed on Maple Ave. following a traffic accident, and these Vienna Police officers immediately provided CPR. With gratitude for their life-saving actions, Mr. Hunt presented certificates of appreciation to officers Kenny Smith and Chip McElhattan at last night’s Vienna Town Council meeting. Because of them, he says he was able to celebrate his 60th birthday.” [Town of Vienna/Facebook]

There are few more self-evident testaments in Fairfax County to the shortsighted follies of 20th century land-use planning than Seven Corners.

The groundwork for the confounding convergence of Route 7, Route 50, Sleepy Hollow Road, Wilson Boulevard, and Hillwood Avenue in the Falls Church area was laid before the Civil War. Arlington Boulevard and Leesburg Pike emerged from early county roads that intersected at Fort Buffalo, according to a 2015 article by the Washington Business Journal.

A literal crossroads between Fairfax and Arlington counties and the City of Falls Church, the intersection became more intricate post-World War II, as the area saw a population and development boom, epitomized by the introduction of the Seven Corners Shopping Center, once the largest mall in the D.C. region.

According to The Washington Post, traffic was already a “major headache” in the early 1950s, and “state and local governments spent millions to alleviate” congestion when the mall opened in 1956. But conditions have kept deterioriating despite a patchwork of fixes implemented since then, including the addition of the Route 50 overpass near Patrick Henry Drive in 2009.

“It’s too complex. If you drive through now, you get stuck, everybody blocks each other, it doesn’t work,” Mike Garcia, the Fairfax County Department of Transportation’s planning section chief, told Tysons Reporter last week. “They’ve gone through and adjusted the signals many times. They’ve got it about as good as they’re going to get it.”

Since inverting time to undo this knot isn’t an option, Fairfax County is now trying to at least loosen it, and this time, it is willing to take the time to hopefully do it right.

As part of a larger package of funding requests, the Board of Supervisors voted on Sept. 14 to authorize transportation staff to seek $94.8 million from the Northern Virginia Transportation Authority for the first phase of a “ring” road that will eventually connect the west side of Route 7 to Wilson Boulevard.

The Seven Corners Ring Road project dates back to 2014, when a visioning task force charged with identifying possible land use and development improvements for the neighborhood recommended including the concept in a comprehensive plan amendment that the county board adopted on July 28, 2015.

According to Garcia, the county and task force considered six different options for improving the interchange, but they ultimately determined that a circular road looping through each of the main streets to create more traditional four-way intersections would be most effective.