The McLean Citizens Association has concerns about how Fairfax County is approaching changes to McLean Central Park.

The MCA board of directors approved a resolution on Wednesday (July 7) questioning the concept development plan that the Fairfax County Park Authority has proposed for the park, which would add facilities such as an amphitheater and a dog park. It called for further community input, such as a community-wide survey, notices posted in the park, and another extension of the comment period.

“Document the need. Document why,” Barbara Ryan, chair of the environment, parks, and recreation committee, said in describing part of the resolution. “Don’t just destroy green…space to build things that aren’t needed.”

With $2.2 million in construction funds available for the project, thanks to park bonds already approved by voters, park authority officials say the proposed ideas were in line with a 2013 master plan and held a meeting on May 24, kicking off a 30-day comment period.

The deadline for community members to submit feedback was later extended from June 25 to July 30, in part due to a request for more time by MCA.

The association has raised concerns over the amphitheater in a quiet neighborhood next to residences, saying it could create undesirable light, noise, and traffic.

In a June letter to the park authority, MCA President Rob Jackson also cited possible pedestrian safety issues, suggesting the county should study traffic impact and mitigation alternatives and have a professional conduct a parking study.

“While this may have been a community desire 8 years ago, there is simply no demonstrated need for the amphitheater,” Jackson said in the letter, which was also sent to county officials. “This is especially the case in light of the…Alden Theater at the McLean Community Center as well as the new, several stages nearing completion at the Capitol One Center.”

MCA also noted that an existing gazebo already provides space for outdoor events. The group has 500 dues-paying members and also assists others who reach out to the group when they face an issue.

The MCC governing board held a special called meeting on Tuesday (July 6) that focused on articulating its position on the park redevelopment plan and developing an “outreach strategy to drive support” for an amphitheater, according to the agenda.

The county has also suggested that the proposed dog park would require eliminating a tennis court, which drew concerns from players who have enjoyed the wind-protected, lighted courts and felt that money could be better used for maintenance.

While the design isn’t expected to be finalized until early next year, park authority staff told Tysons Reporter in June that the park’s three tennis courts will likely remain in their current positions in deference to the community’s expressed desires.

The MCA resolution says the county’s new proposal calls for new park elements “for which demand has not recently been articulated, documented, or even surveyed in the community, such as the proposed amphitheater, bocce courts and game tables, while neglecting needed maintenance of existing facilities, such as tennis courts, and features that were removed without community notice, outreach or comment, such as disc golf.”

A nine-hole disc golf course was in place for decades at the park but removed around 2017 or 2018, at-large board member Kevin Kierce said.

The park authority has suggested reinstating the course if possible.

FCPA Project Management Branch Manager Paul Shirey previously said the disc golf was removed due to a stream restoration project. He said the county is aware of interest in bringing it back and also checked with a disc golf course designer but need to make sure it doesn’t interrupt restoration improvements made.

“The green space was well used for over 30 years,” Kierce said.

Metro Police Didn’t Investigate Thousands of Crime Reports — “Metro police didn’t follow through with more than 3,000 complaints filed between 2010 and 2017, the report from the Washington Metropolitan Area Transit Authority Office of Inspector General says. They included a variety of felony and misdemeanor offenses such as armed robberies, sexual offenses, kidnappings, assaults and other crimes.” [NBC4]

County Rec Centers Introduce “Pay-As-You-Go” Option — Rec Center users can now pay on a month-to-month basis for membership to the nine facilities, including the Providence center in Falls Church and Spring Hill center in McLean. The Park Authority says this has been a longstanding request from customers, especially younger people on a tighter budget. [Fairfax County Park Authority]

(Updated at 2:45 p.m.) When residents at McLean’s Vinson Hall Retirement Community wanted outdoor recreation during the pandemic, retired Marine Col. Mike Cluff grabbed a pickax and sledgehammer and built the sought-after amenity himself.

Decades before he became a resident at Vinson Hall (6251 Old Dominion Dr.), Cluff oversaw the building of an encampment in Vietnam and was present during the Tet Offensive in 1968.

More recently, he put his “keep moving” mentality to use to construct horseshoe and bocce ball pits for the McLean retirement community, an approximately 400-room facility that focuses on caring for military veterans and their families as well as high-ranking former federal government employees.

“The genesis of this was…everyone wanted to play outside,” Michelle Crone, director of philanthropy and engagement for the Navy Marine Coast Guard Residence Foundation, said.

Cluff, 82, was motivated to construct the horseshoe and bocce pits by fellow Vinson Hall resident Midge Holmes, who is active with getting people involved and wanted residents to be able to play horseshoes.

After looking up plans for horseshoe pits online, Cluff worked with the retirement community to get the materials he needed and spent a few weeks during the spring of 2020 finishing the project, which is located on the site of a former house that was demolished years ago and is now becoming an outdoor recreation area.

Vinson Hall later added artificial turf to the horseshoe and bocce ball pits to help with maintenance. A multi-surface area next to them is under construction and could facilitate more outdoor activities, such as pickleball, which was played inside at the facility until the pandemic halted it.

The new outdoor recreational area is one of several capital projects that Vinson Hall has undertaken during the pandemic after getting a financial boost, thanks to a Fairfax County Economic Development Authority measure that let the retirement community refinance bonds that had been previously issued to fund campus improvements.

The retirement community is refinancing around $70 million in debt to get a savings of some $10 million to $12 million over a 12-year period with the economic development assistance, he says. The FCEDA approved the measure on June 14, and the money is being facilitated by Truist Bank.

“In our business, every dollar counts,” Bova said.

Among the ongoing improvements is a renovation of The Sylvestery (1728 Kirby Rd.), a memory care unit that assists residents with Alzheimer’s disease and other forms of dementia.

Other proposed changes include enhanced lighting and other additions to the memory care unit’s sensory room, which offers an array of items for residents to touch and interact with, from stuffed animals to tropical colored bowling pins.

Called a sensory oasis, the room helps patients with dementia calm down, says Antionette Doublin, senior director and administrator of the skilled nursing facility Arleigh Burke Pavilion and The Sylvestery. Research shows that multisensory sessions can help verbal agitation and provide other benefits.

“So, we bring them in here, and it calms them down,” Doublin said.

The Sylvestry is also getting a central kitchen area that can host cooking demonstrations. The project is currently under construction and could be finished in two to three weeks. 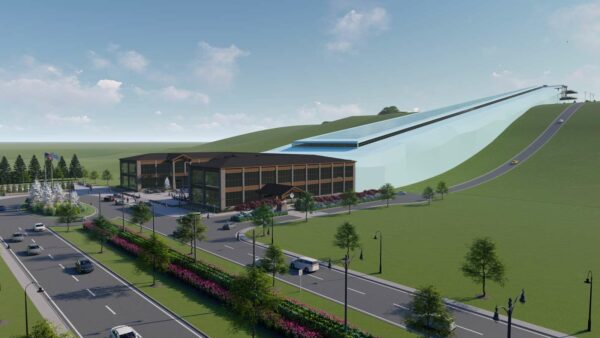 A vision that began snowballing with two Fairfax County residents — Niels ten Berge of Vienna and Jeff Hokenson of McLean — is closer to becoming a reality.

Based in McLean, their company Alpine-X is behind the Fairfax Peak indoor winter slope facility that will turn a landfill by I-95 in Lorton into what Fairfax County hopes will be a prime tourist destination for skiing, snowboarding, and more.

Hokenson says the idea for Alpine-X came from ten Berge, who was inspired by his experience with indoor snow sports venues in Europe.

“Niels had a simple but powerful premise: These venues are popular in many parts of the world — why shouldn’t they also be successful here in the U.S.?” Hokenson said by email. “Also, there’s a vibrant skiing, snowboarding and active-lifestyle culture here in the Washington, D.C. area, so this market seemed like a logical place for the first project.”

With Fairfax Peak as the flagship site, Alpine-X announced on May 25 that it hopes to bring more than 20 facilities to North America. Previously, the company stated that it envisioned 10 destinations in America.

The company told Tysons Reporter that the new number includes locations in the U.S. and Canada.

For Fairfax Peak, Alpine-X has proposed leasing land from the county, which would still keep parts of the landfill in operation.

Plans presented to the county called for several other elements, including an alpine coaster and a wave pool with surfing possibilities that could come with a second phase of the project. The indoor slope would have an approximately 20-degree angle.

“The proposed Snow Sports facility is expected to be approximately 450,000 sq. ft., with multiple slopes, the longest of which should be 1,700 ft. in length,” the company said in its proposal. “Additionally, the facility will have a terrain/fun park, snow tubing runs, a ‘bunny slope’ for new skiers, or for training, a ski shop, multiple restaurants and bars, a sky-bar and event space, an outdoor courtyard…and more.”

Alpine-X is the developer of the recreational project and has partnered with SnowWorld International B.V., a consulting subsidiary of SnowWorld N.V., which has indoor snow resorts in the Netherlands and has worked on other projects across the globe.

Alpine-X has a 50% ownership stake in SnowWorld USA, which will be the owner and operator of the snow sports facility and other elements, such as a 100-plus-room hotel.

Fairfax County supervisors approved an interim agreement for the project in November, extending a previous approval. It allows the company to explore the potential of the site and continue negotiations with the county. The interim agreement lasts until Dec. 31, 2021 and could be extended for another year.

The company initially suggested a 99-year lease with a potential buyout option for the property. The county’s public affairs office said it’s county policy to not comment on ongoing negotiations.

Proposed pricing for Fairfax Peak is not yet available, but the facility is expected to be more cost-effective than traditional slopes that have seasonal windows.

“The Alpine-X experience aims to complement established ski resorts — not compete — as we will have the opportunity to introduce new demographics to snowsports at large, ideally inspiring passion and potential interest in hitting the outdoor mountains down the road,” Hokenson said, noting that the company plans to partner with established winter resorts nationwide.

The new facility could also be a boon for local businesses like Alpine Ski Shop, which has a store at 9629 Fairfax Boulevard in Fairfax as well as a location in Sterling (21999 Shaw Rd.).

“We love the prospect of introducing the sport of skiing and snowboarding in a fun, controlled environment and bringing it to a wider audience,” owner Chris Bunch said in an email. “The proximity is an added bonus!”

Bunch also said the slope will “provide experienced skiers and snowboarders the opportunity to get a quick ride in during the work day or head over and ‘run laps’ to keep the legs in shape.”

Alpine-X believes Fairfax Peak could be in operation in late 2024 or early 2025.