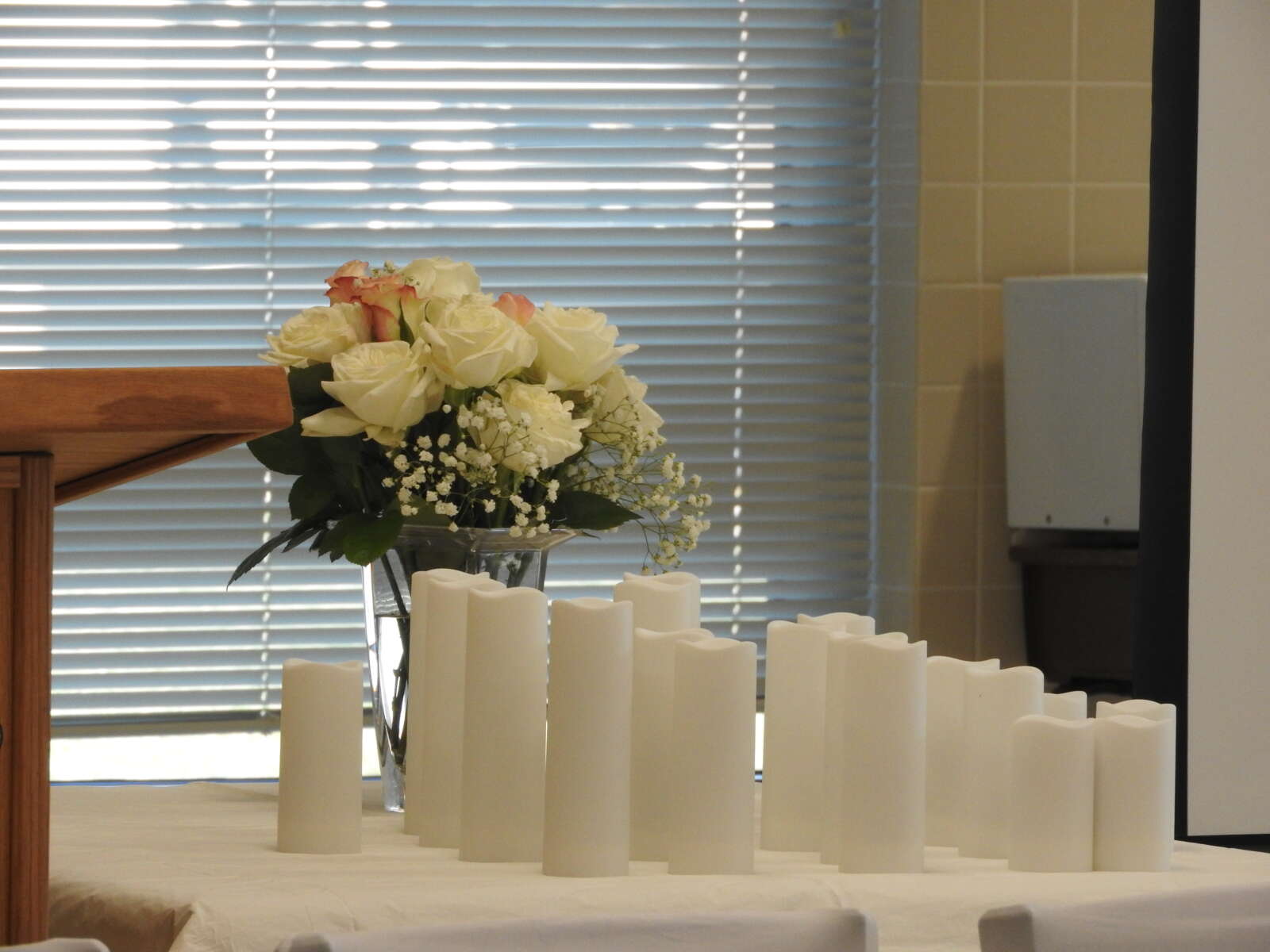 Even with one month left, 2022 is the deadliest year for Fairfax County pedestrians in more than a decade.

Through October, vehicle crashes have killed 22 people on streets and highways in the county — the most since at least 2010, the earliest year in Virginia’s Traffic Records Electronic Data System (TREDS). The previous high came in 2018 and 2019, when there were 17 fatalities each.

It’s unclear if the state data includes the teen who died last Wednesday (Nov. 16) after being hit while crossing Columbia Pike in Bailey’s Crossroads.

The teen was among the almost two dozen people represented at Oakton High School on Sunday (Nov. 20) by electronic candles and empty chairs covered by shroud-like white sheets. A Fairfax Families for Safe Streets (Fairfax FSS) volunteer read their names in a hushed cafeteria for the community group’s World Day of Remembrance for Road Traffic Victims ceremony.

“We have experienced many more tragedies than we are able to name individually today,” Fairfax FSS volunteer and board member Chris French said, noting that the list didn’t include 18 non-pedestrians killed on county roads or people who survived crashes but still suffered physically, financially and emotionally.

One life lost is too many. All of us need to work together to make sure our streets are safe and I am grateful for the continued collaboration with our community in keeping this a priority.@JeffreyCMcKay @fcpsnews @FairfaxCountyPD @ffxconnector @VaDOTNOVA @OaktonHS

Started by European nonprofits in 1995, World Day of Remembrance is commemorated on the third Sunday of every November as an occasion to mourn those lost and a call to take action to prevent future losses. FFS also had events in Alexandria and Arlington.

Fairfax FSS urged local and state officials to make safety improvements throughout the area, especially in corridors known to be dangerous to pedestrians like Columbia Pike and Blake Lane — where two Oakton High School students were killed and a third was seriously injured in June.

Fairfax County is moving to make that first demand at least a reality. Spurred in part by the fatal Oakton crash, the Board of Supervisors is expected to approve a speed camera pilot program after a public hearing on Dec. 6.

The six-month pilot will only involve nine schools and a work zone on Route 28, but Providence District Supervisor Dalia Palchik said the county is committed to expanding it to all eligible sites.

“I’ve been a big advocate and remain a big advocate of automated traffic cameras,” Davis said. “I know that’s coming to Fairfax County, and that changes driving behaviors. There’s no doubt about it.”

While glad to see the county take action, Fairfax FSS volunteers questioned why a pilot is needed when cameras have proven effective elsewhere — including Maryland’s Montgomery and Prince George’s counties, where Davis previously worked.

Fairfax City began operating cameras at all four of its schools, plus two county schools, in October, and Arlington County approved a program in January with no pilot stage. Alexandria City could follow suit next year.

“I think the pace and the urgency is not where we’d like to see it,” French said of the county’s speed cameras plan. “There’s just not enough urgency. Change is happening too slow, and people are dying in the meantime.”

Fairfax County is much larger than those jurisdictions, with nearly 200 public schools compared to Arlington’s 30, so county officials felt a pilot will help ensure the speed cameras are implemented successfully before they’re installed everywhere, Palchik said.

She and Karl Frisch, who represents Providence District on the school board, emphasized that success will be measured by whether drivers change their behavior, not the revenue generated by speeding citations.

“I hope people see that they’re installed and they drive better, and they drive slower, because that’s the desired outcome,” Frisch said. “The desire is to make sure people are driving safer.”

Beyond the speed camera pilot, the county is approaching traffic safety from a variety of angles. Some projects focus on specific sites, such as a rerouting of school buses away from Blake Lane and a plan to spend $100 million on pedestrian improvements over the next six years.

Others are broader in scope, from the “Take a Moment” educational campaign launched in September to a new “Safe Streets for All” program. The county also selected the consultant Street Simplified to study streets that can be improved before crashes occur.

The consultant has finished collecting data at 70 intersections that it’s now analyzing, according to Palchik.

“We’ve come a long way, but there is so much work left to do, and we don’t want to see one more life lost because of a preventable crash,” Palchik said. “It really does take all of us. It takes messaging, the change in behavior, the change in infrastructure, the change in enforcement to really do everything we can to achieve that goal.”

Still, in most cases, the county’s ability to address safety concerns hinges on cooperation from the Virginia Department of Transportation, which maintains most roads.

While county officials said they’ve been collaborating with VDOT on many initiatives, including potential speed limit reductions on Richmond Highway and Route 7, Fairfax FFS says engaging the state has been a challenge. VDOT staff and the county’s General Assembly legislators were no-shows at the World Day of Remembrance event, despite all being invited.

French and fellow Fairfax FFS board member Phil Kemelor say VDOT relies on studies that can take months even for spot changes like signal or sidewalk upgrades. By law, the state also values congestion mitigation over safety, accessibility and other factors when prioritizing projects for funding in Northern Virginia.

“It’s a bureaucracy, and they just don’t have the will to change anything,” Kemelor said. “It’s like the process is more important than the people, speaking bluntly.”

VDOT’s Northern Virginia district office didn’t directly address its absence from Sunday’s event but said in a statement that it is working to “improve safety and mobility for all”:

VDOT continues to actively work with our stakeholders including county agencies, elected officials, transit providers, community members, and advocacy groups to improve safety and mobility for all of the users of our regional transportation system. We live, work, and raise our families in Northern Virginia and continue to look at innovative ways to continue to usher in more multimodal solutions in our region.