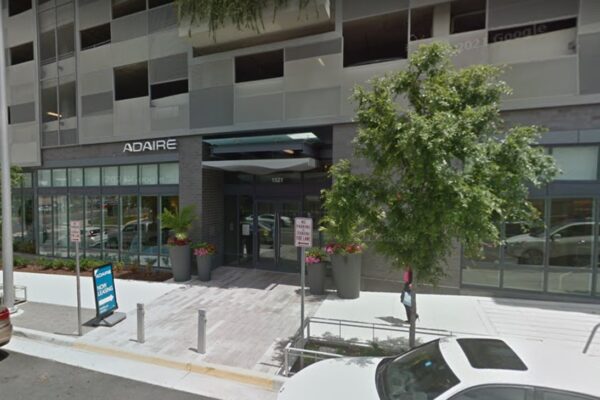 (Updated at 6:35 p.m.) Tysons got an unexpected visitor this weekend in the form of an apparently solo black bear.

The animal was spotted ambling along the Boyd Pointe Way sidewalk outside the Adaire Apartments in a video shared on Twitter last night by FOX5 reporter Angie Goff. She said it was seen on Sunday (Oct. 30) at 1521 Boyd Pointe Way.

While startling, bear sightings have increased in Fairfax County in recent years, the police department told FFXnow in June after a bear was photographed crossing the GW Parkway in Belle Haven.

Bears were also reported near McLean Hamlet Park, in Vienna and in Arlington this summer. Reston resident Victor Toth told FFXnow on Sept. 27 that he spotted a bear crossing Soapstone Drive toward Frederick Crabtree Park around 8:45 a.m. that day.

“No picture yet, unfortunately, and while it was only medium sized it was beautiful nonetheless,” Toth said in an email.

It’s unclear if these have all been different bears or the same one or two popping up in different locations.

The Fairfax County Police Department anticipates that bears will continue to appear more frequently into the future, as the animal’s population grows and the county becomes more developed, making it harder for bears and humans to avoid contact.

“Bears have adapted to living near people and we must also learn to adapt to bear activity and take responsible action to prevent conflicts from occurring in our communities by removing food sources that attract bears,” police said in June.

Still, a bear in Tysons at this time of year may be particularly unusual. According to Fairfax County, bear sightings are more often reported during the spring and summer as bears venture out in search of food.

“Black bears hibernate early November through March or April, depending on food availability,” the county says on its website.

Located near the Spring Hill Metro station, Adaire Apartments has a small expanse of grass with a path and benches known as Great Lawn Park, but the area is otherwise decidedly urbanized. The bear could have traveled from McLean Hamlet Park, which is just over a mile away on the other side of the Dulles Toll Road, or across Route 7 from Raglan Road Park.

Fairfax County’s Animal Protection Police doesn’t take action to remove black bears, but any issues can be reported to the Virginia Department of Wildlife Resources (DWR) helpline at 855-571-9003.

The FCPD advises preventing conflicts by removing food sources that could attract the creatures.