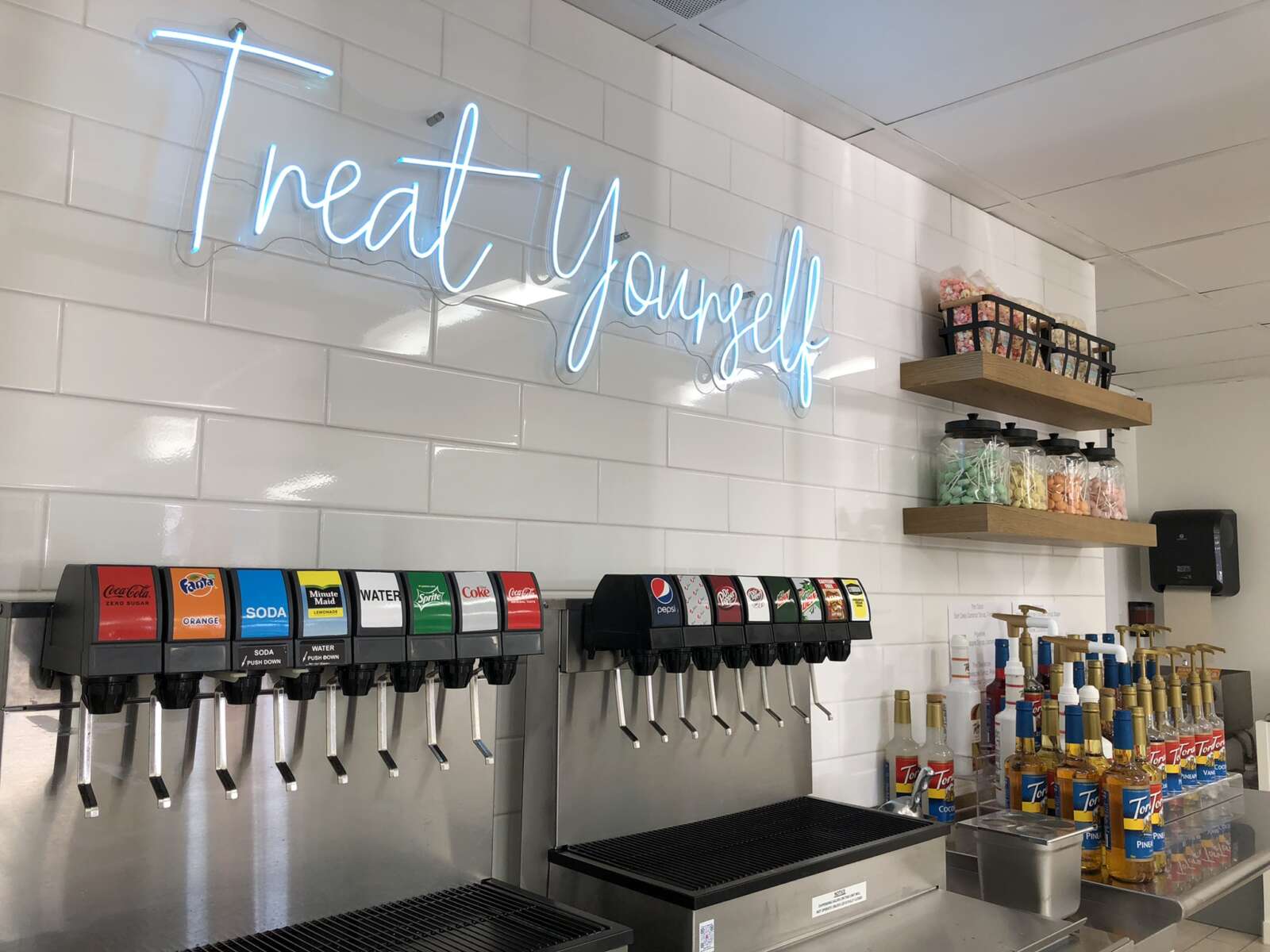 Coco’s Sodas + Sweets is ready at last to give Vienna its first taste of “dirty sodas” — flavor-spiked soft drinks that originated as a coffee substitute in Mormon-heavy Utah.

The soda shop officially opened today (Friday) in The Village Green shopping center at 513 Maple Avenue West, Suite 110. Details about a grand opening on Oct. 28 will be shared on the business’ Instagram and Facebook pages, co-owner Ben Cichelli told FFXnow.

The opening has been a long time coming for Coco’s, which initially expected to launch around Memorial Day weekend.

Cichelli and his wife and co-owner Heather Cichelli attributed the delay to a variety of factors, from staff shortages plaguing both Fairfax County and contractors to the arduous task of outfitting a space that formerly housed a tailor shop with infrastructure for food service.

“We were able to navigate through there, and we think it’s a beautiful space,” Ben said. “We’re really excited to have the community come and see this, and I think it’ll be a great addition to all the other great shops and businesses that are here in Vienna.”

As previously reported, the Cichellis decided to bring dirty sodas to their new home of Vienna after encountering the drinks in Utah, where they were staying during the first year of the pandemic.

Inspired by chains like Swig, which sparked a TikTok trend earlier this year thanks to a visit by singer Olivia Rodrigo, Coco’s offers three base beverages: soda, energy drinks like Red Bull or Monster, and still or sparkling water for those seeking a less sugary option.

The base drinks are then mixed with syrups, fruit purées, and cream and sometimes topped with fresh fruit, such as a lime. Toppings for the kids’ drinks include gummies, sprinkles and marshmallow Peeps.

Also selling treats like lollipops, flavored popcorn and cake bites, the shop uses a grab-and-go model, with just a couple of outdoor patio seats for when the weather is warmer. It will also have a mobile bar that can cater events and parties, though the menu will be condensed.

Hours of operation run from 10 a.m. to 9 p.m. on Monday through Thursday, and from 10 a.m. until 10 p.m. on Friday and Saturday. The store is closed on Sundays.

Though open to expanding to other locations in Northern Virginia, if the opportunity arises, Ben and Heather are focused for now on bringing some pop to Vienna’s dessert scene, which already includes establishments specializing in pies, cupcakes, cookies, ice cream, Italian ice and even lokma.

“This is a great location, great space, being right at Nutley and Maple Ave,” he said. “I think this is a really good, busy, high-traffic, high-visibility area. We’re walking distance to Madison High School, so we hope to get a lot of the student traffic from there. Yeah, we’re just really excited to finally open.”