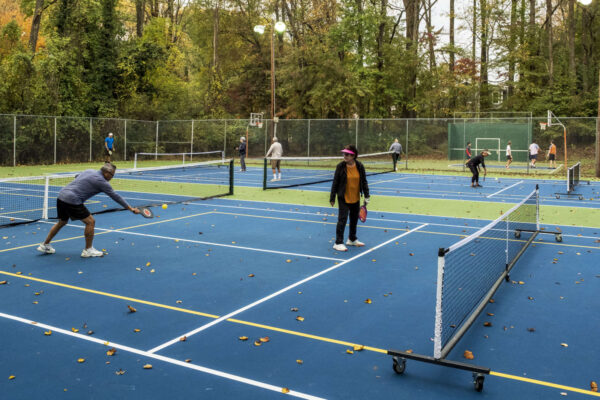 Fairfax County could designate different times and days for when tennis and pickleball players can use its shared courts.

That is one of the changes under consideration by the Fairfax County Park Authority after its board approved a pickleball study report in December that highlighted concerns about the two sports competing for limited court space.

“This information would be posted onsite and is aimed at reduced conflicts between players of both popular sports,” Park Authority spokesperson Judy Pedersen said by email.

Intended to gauge demand for new facilities and illuminate existing issues in the county, the pickleball study kicked off with an online survey in December 2020.

The survey ultimately drew over 1,800 responses, 600 of which mentioned locations where people experienced conflict between pickleball use and another recreational activities, particularly tennis.

Respondents reported encountering often crowded courts, and one person recalled being told by a tennis player at Kemper Park in Oakton that the courts were for “tennis only,” even though the pickleball group had eight players.

In response to the sport’s growing popularity, Fairfax County has added 19 pickleball courts to existing tennis courts over the last 18 months. In November, two pickleball-only courts opened at Wakefield Park in Annandale.

With those additions, the FCPA now has 52 outdoor courts outfitted for pickleball, on top of six indoor courts in its recreation centers — a total similar to other similarly sized jurisdictions, according to the report.

However, the report also noted that the park authority has fewer facilities with six or more dedicated pickleball courts compared to other providers.

It recommended that the county create at least two pickleball-only facilities with at least six courts for large group drop-in play and tournaments, either by repurposing underutilized facilities or building new ones.

The FCPA is already looking at Lewinsville Park in McLean as a possible site for adding pickleball courts or converting the existing tennis courts into shared-use facilities.

Site constraints, the proximity of other facilities, and accessibility for populous areas in the county are among the factors that the county is taking into account when deciding potential court locations, according to Pedersen.

“Although we may potentially use park bond dollars in the future for the design and construction of pickleball-only facilities that could be used by larger groups, these projects would compete with the many other Park Authority projects, initiatives and capital needs of the entire park system,” Pedersen said.

END_OF_DOCUMENT_TOKEN_TO_BE_REPLACED

More Stories
Middle Eastern restaurant Tawle to open at Mosaic District this summerPet of the Week: Thor and Czar, two cats whose owner died from COVID-19