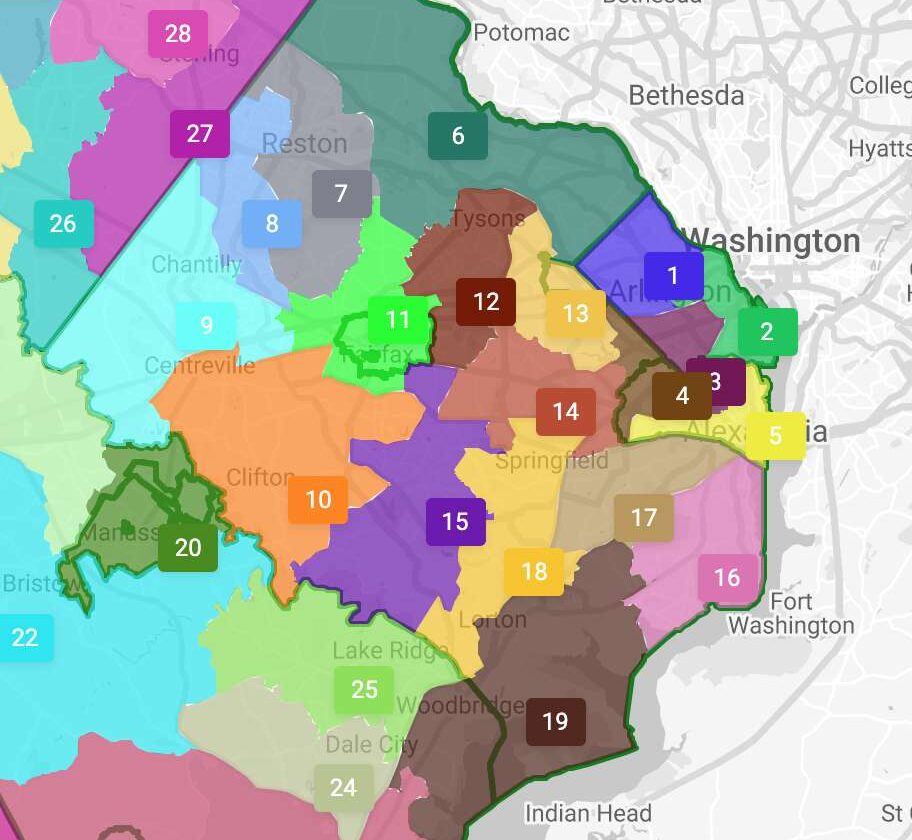 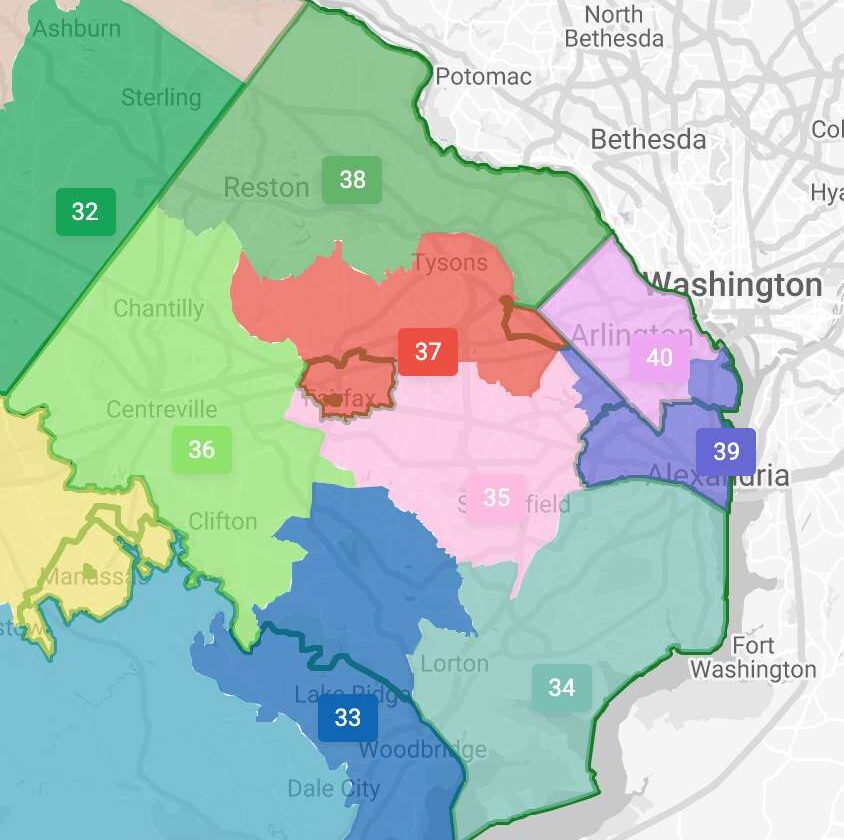 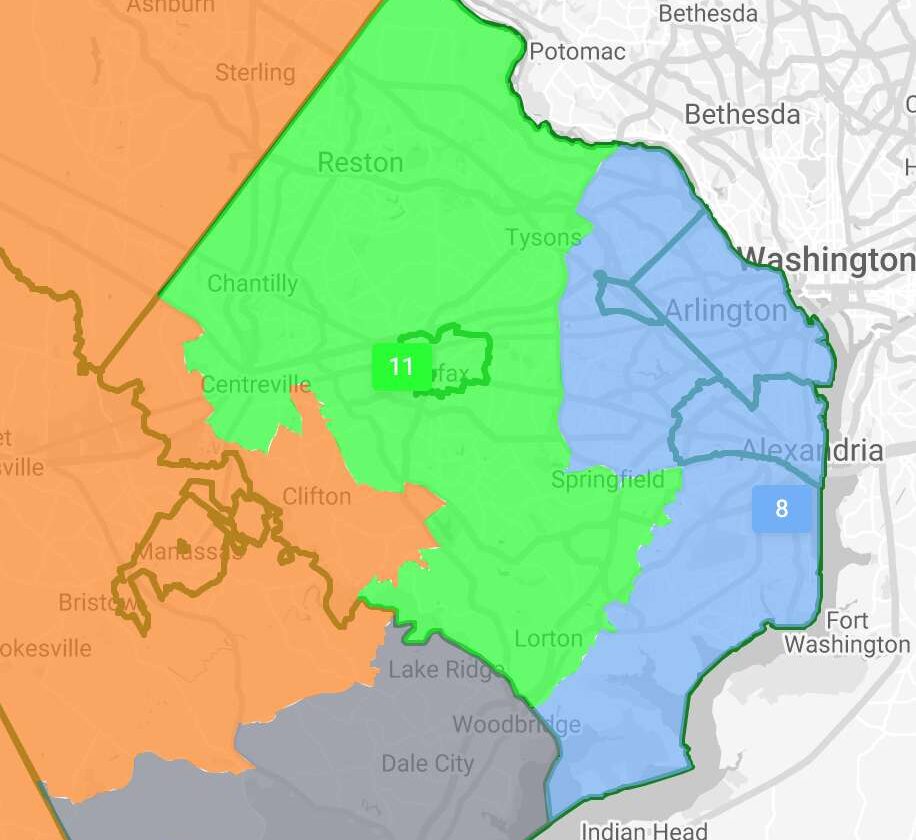 Fairfax County’s General Assembly delegation could get a serious shake-up in upcoming elections.

The maps also altered U.S. House of Representatives electoral boundaries. They are in effect for the 2022 general election, which will have members of Congress and the state Senate on the ballot.

Intended to reflect population changes shown by 2020 Census data, the maps were drawn by two court-appointed “special masters” — one Democrat and one Republican — after a nonpartisan commission failed to complete the task. It was a contentious process in comparison to Fairfax County’s redistricting efforts last year.

Under the new maps, there are three open seats representing Fairfax County in the House of Delegates and one open seat in the state Senate, according to analysis by the nonprofit Virginia Public Access Project:

However, at the state level, four House and two Senate districts now have incumbents living within the same district lines, requiring them to make a choice: run in a primary against a colleague, move to another district, or retire.

Throughout the redistricting process, the special masters said aligning with incumbents’ residences was not a priority compared to other considerations, like compactness and preserving communities of interest.

“It’s a challenge for any incumbent when paired with a colleague after redistricting, especially within the same political party, to decide whether he or she should continue on or call it a day for the public service,” said George Mason University Schar School of Policy and Government professor David Ramadan, a former delegate himself. “Bottom line, this is politics, and each member is going to do what that member thinks is best for them.”

Long-time incumbents Kathleen Murphy and Richard “Rip” Sullivan have been paired in a district that extends from the Arlington to Loudoun county lines, encompassing McLean, Great Falls, and Wolf Trap.

Most residents are currently represented by Marcus Simon, but there are also some constituents of Kaye Kory.

After criticizing the draft maps for “trying to be cute” in early December, Simon said after the finalized maps came out that he is looking “forward to continuing to represent Fairfax County and Falls Church in the General Assembly for many years to come.”

Covering Springfield down to the Occoquan and the Loudoun County border, this district pairs outgoing Speaker of the House Eileen Filler-Corn and Delegate Kathy Tran.

The newly formed district mostly consists of Tran’s constituents, potentially leaving the first woman to serve as Speaker of the House in Virginia vulnerable even in a primary.

Dan Helmer and David Bulova are paired in a district that includes Centreville and Clifton, extending to the Loudoun County border. Bulova was first elected in 2006, while Helmer took office more recently in 2019.

Helmer, whose voters make up a majority of the district, said that he looks “forward to continuing to fight for our values in the future.” FFXnow also reached out to Bulova, but has yet to hear back as of publication.

Rumors have emerged that ​​Senate Majority Leader Dick Saslaw could be retiring after being drawn into the same district as Senator Dave Marsden. Saslaw, who’s served in the Senate since 1980, has not announced any intention as of yet.

Marsden plans to run for reelection in the district, which has Springfield, Annandale, Lake Barcroft, and George Mason. He told FFXnow that he and Saslaw have spoken about the situation, but declined to give details beyond that.

Marsden says compacting the district into Fairfax County, as opposed to it extending into Alexandria and Prince William County, makes the job easier for him and reduces the need to commute to various events.

However, he believes pairing incumbents will cost the General Assembly experienced lawmakers.

“We count on those who’ve been there for years,” he said. “They help and teach you. This is a part-time job and we need that. We could lose…legislators with lots of institutional knowledge.”

FFXnow contacted Saslaw, but hasn’t heard back as of publication.

Janet Howell and Jennifer Boysko face a similar situation in this district that covers Herndon, Reston, McLean, and Great Falls up to the Potomac River.

There’s been some retirement talk around Howell, a veteran of the Senate since 1992. Boysko is a relative newcomer, first elected to the House of Delegates in 2016 and to the Senate in 2019.

Boysko says compacting the district and bringing Herndon and Reston back together “makes more sense,” but she laments being put in competition with Howell, who she describes as “the dean of the Senate” and a “true pioneer for women in government.”

Howell hasn’t responded to a request for comment from FFXnow, but Boysko says they have spoken.

“There’s an ongoing dialogue between the two of us,” she said. “I think the world of her.”

Nonetheless, Boysko says she plans on running again and winning.

When lawmakers convene for the next session later this month, redistricting will certainly be a topic of conversation, Ramadan says.

“Colleagues sitting next to each other that have the same interests in legislation are now going to have it in the back of their minds as well: ‘Oh, I’m running against this person, possibly, in a primary,’” he said. “That’s going to change the atmosphere and it’s going to look like a totally different legislative session than a regular session.”