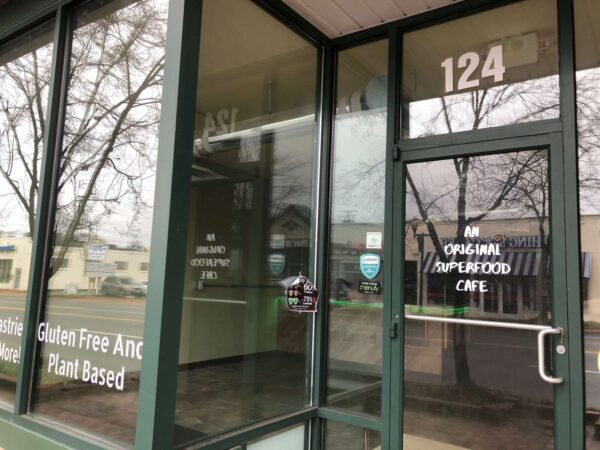 Viva Sol Juice Company is looking for a fresh start for the new year.

The Vienna-based, family-run café officially closed its space at 124 Maple Avenue West on New Year’s Eve, but the move is less of a demise than the first step in an evolution.

Owner Kelly Hartranft opened Viva Sol in August 2020 as a juice and smoothie bar, yet the menu items that ultimately took off were not the cold-pressed juices or fruit bowls. Instead, the company saw sales boom with the introduction of gluten-free doughnuts and empanadas.

“The numbers were in front of me to pivot towards focusing on doughnuts and empanadas, rather than the whole café concept,” Hartranft told Tysons Reporter.

As part of the pivot, Viva Sol is relocating to a commercial manufacturing kitchen in Chantilly that will exclusively make doughnuts and empanadas, primarily for online ordering and delivery.

Hartranft says the business will continue to participate in local farmers’ markets, and in-person pick-ups may be possible, depending on the space’s layout.

Expected to launch in February, the new kitchen will initially focus on delivering within the D.C. area before expanding to customers outside of the region next year. A website overhaul that reflects the rebranding and new e-commerce approach is also in the works.

In addition to adapting to her company’s strengths, Hartranft closed the Vienna juice bar to minimize her staff’s interactions with customers, as COVID-19 cases continue to soar throughout the community.

Like other retail and service businesses, Viva Sol has experienced its share of hiring challenges, but it has a core staff that will remain intact with the move to Chantilly.

“I wanted to figure out a way to protect my family, protect my staff with minimal interaction,” she said. “I’m sure you know all these restaurants are very understaffed, people are getting sick, and so, it just kind of made sense for me.”

Even so, the decision to leave Vienna was a tough one for Hartranft, whose family has lived in the town since the early 1980s. She encourages supporters to follow Viva Sol’s Facebook and Instagram pages for updates, including news about the new location and reconfigured name.

“We’re really sad to be moving, but the restaurant/café model for us wasn’t working,” Hartranft said. “My numbers were really, really showing how much we grew overnight…I mean, it took off with certain items, and so, I’m just reading my numbers and leading my team to the next phase.”