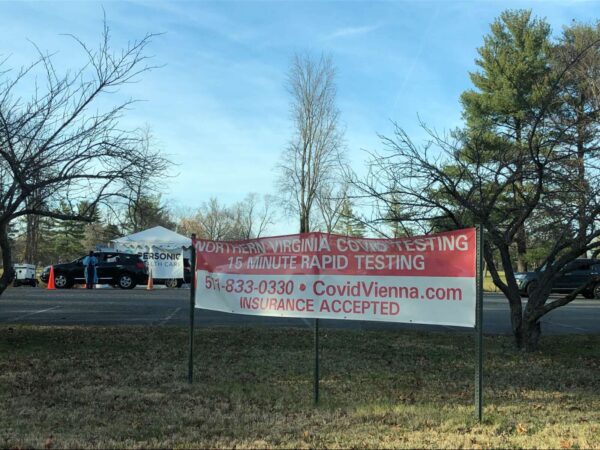 Vienna residents looking for a free, rapid COVID-19 test might have to venture a little farther in the new year.

After Friday (Dec. 31), the town’s only drive-thru testing site will vacate the Emmaus United Church of Christ parking lot that it has occupied since March, even with demand for COVID-19 testing soaring amid the ongoing omicron surge.

The town council voted on Dec. 6 to extend the ordinance through Dec. 31, but it can’t be renewed beyond six months after Virginia ended its state of emergency, which happened on June 30.

Once the emergency ordinance expires, the Personic testing site will no longer be allowed in its current location, which isn’t zoned for commercial uses. Unless the town council undertakes the lengthy process of amending Vienna’s zoning code, New Year’s Eve will be the facility’s last day.

“We wracked our brains to see if there was something that could cover it under current zoning,” Vienna Town Attorney Steven Briglia said at the town council meeting. “We stretched the emergency ordinance as far as we could.”

John Mauthe, the moderator at Vienna’s Emmaus United Church of Christ, says the church agreed to rent its parking lot to Personic for the testing site in early 2021 after it was approached by the health care company, which formed in response to the pandemic.

The church obtained the temporary permit from the Town of Vienna, but the facility isn’t an official church program.

“We were excited about it because it gave another rapid test availability to residents that wanted it, that needed it,” Mauthe said.

The site opened on March 16, offering free, rapid antigen testing that provided results in 15 minutes as well as RT-PCR tests with results guaranteed within 24 to 48 hours. It accepts people without health insurance, though a social security number is required, according to the website.

Mauthe says his church hasn’t experienced any issues with the testing site, since its hours don’t interfere with weekend worship services.

The surge in demand over the past couple of weeks, though, contributed to traffic backups on Maple Avenue, prompting Personic to start requiring appointments. When FFXnow contacted the Vienna site last week, an agent said they had been “bombarded” with calls.

When called yesterday (Tuesday), a Personic agent confirmed that all of the company’s testing sites in the area, including the Vienna one, are booked until next week. She said each facility accommodates about 100 appointments per day.

Vienna Mayor Linda Colbert says the drive-thru testing site has been “an important public health resource,” but there will still be multiple locations offering testing services in the Vienna area, including primary care offices and commercial pharmacies.

The Virginia Department of Health’s testing site map only shows one other location within the Town of Vienna — a primary care physician’s office — but there are several sites in Tysons and Merrifield.

A town spokesperson says Walgreens is offering testing at its stores on Maple Avenue and Nutley Street.

“While the increase in COVID-19 cases is of concern, we are also mindful that the hospitalization rate is not nearly what it was this time last year, which gives us hope that the vaccine is doing what it was designed to do — reduce the risk of serious illness,” Colbert said in a statement. “The Town Council will continue to monitor the situation and consult with public health officials to determine if additional resources are needed.”

END_OF_DOCUMENT_TOKEN_TO_BE_REPLACED

More Stories
Pet of the Week: Dolce, a tiny terrier with perky ears and a big heartStudent advocates for therapy dog to bring comfort to Madison High School