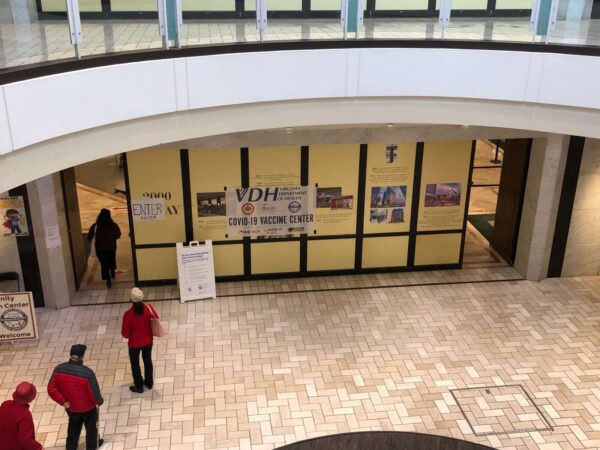 The Fairfax County Health Department reported 569 COVID-19 cases this morning (Monday) for the Fairfax Health District, which includes the cities of Fairfax and Falls Church, pushing the total for the pandemic up to 102,362 cases.

The district has recorded 4,229 hospitalizations and 1,238 deaths, including 10 since last Monday.

It’s only the second time since early February that the district has topped 500 new cases in a single day. The first time came on Saturday (Dec. 18), when there were 512 cases, according to Virginia Department of Health data.

Fairfax County alone is now averaging 392 cases per day for the past week — a sixfold increase since Nov. 10, when the weekly average had dropped to 58.7 cases after the late-summer, delta variant-fueled wave.

Though local health officials expressed hope last week that the area’s relatively high vaccination rates would prevent a surge of the intensity seen last winter, the current seven-day average is actually higher than it was exactly one year ago (381.3 cases), and the rise in transmission has come more rapidly, occurring over one month instead of two.

As of Friday (Dec. 17), the VDH has only confirmed two infections tied to the omicron variant, including one in Northern Virginia, but the speed with which cases have climbed in the past two weeks reflects the trajectory that the variant has taken elsewhere.

Scientists currently estimate that omicron spreads at two to three times the rate of the delta variant, which remains the dominant strain nationally. Omicron is starting to make headway, though, going from 0.4% of cases in the U.S. during the week of Dec. 4 to 2.9% of cases the week of Dec. 11.

Fortunately, early research suggests infections stemming from the omicron variant tend to be milder, and while they appear to be less effective, vaccinations still provide some protection, especially when reinforced with a booster shot.

The number of vaccine doses administered among Fairfax Health District residents has exceeded 2 million after this past weekend.

Local health officials say vaccinations should be combined with the other mitigation measures, like masking and social distancing, that have become common practice during the pandemic.

“We cannot let our guard down and must remain vigilant in our practice of all of these measures to the best of our ability,” Fairfax County Health Director Dr. Gloria Addo-Ayensu said in a statement last week. “Everyone eligible for the vaccine or a booster should get vaccinated, social distance, wear a mask while indoors in public settings, and wash their hands frequently.”

END_OF_DOCUMENT_TOKEN_TO_BE_REPLACED

More Stories
Neighborhood Expert: Top 3 things you should do before buying a home in 2022FCPS starts effort to allow collective bargaining for school workers