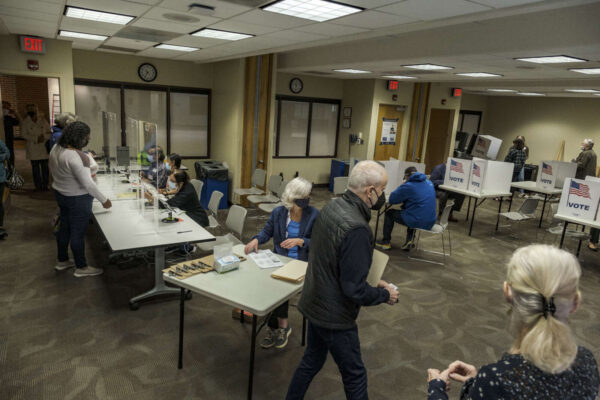 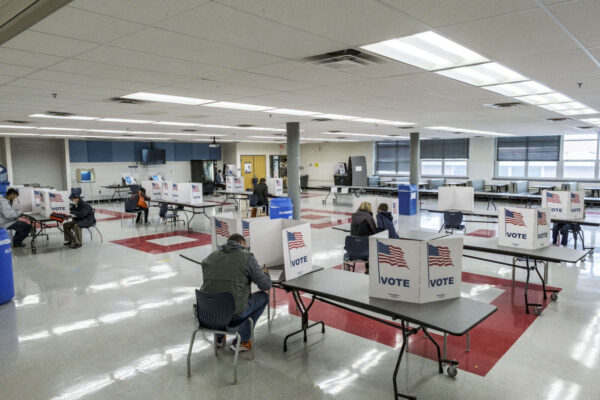 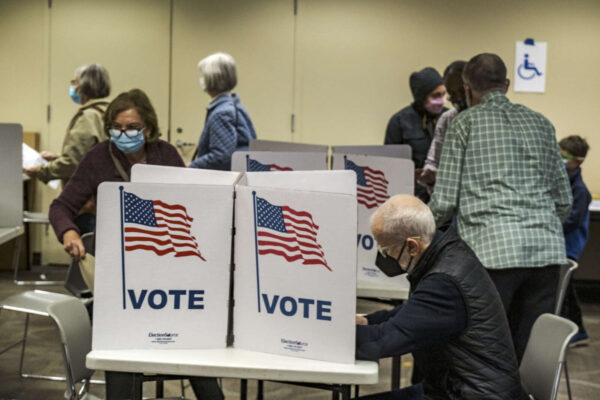 About 40% of Fairfax County voters have now cast a ballot in Virginia’s 2021 general election, which will determine the next occupants of the governor’s mansion and the House of Delegates.

More than 170,000 of those ballots came in before Election Day, accounting for 23.3% of the county’s 730,300 active voters, according to the Fairfax County Office of Elections’ last early voting report.

The county registrar is anticipating a 50 to 60% total turnout for this election, Office of Elections spokesperson Brian Worthy confirmed.

With the introduction of no-excuse absentee voting last year, the county has seen a dramatic increase in early voting compared to the last gubernatorial election in 2017, resulting in fewer crowds and lines on Election Day itself.

The Office of Elections estimates that, as of 1:10 p.m., it has seen a nearly 18% turnout since polls opened at 6 a.m. today (Tuesday). Polling sites in different areas of the county reported steady but not overwhelming streams of voters showing up before noon.

Around 300 voters had passed through Reston Community Center’s Hunters Woods facility by 10:30 a.m., and Marshall High School in Idylwood saw over 600 voters before 11:30 a.m., according to elections officials at those precincts.

An elections chief at Coates Elementary School in Herndon told FFXnow that more than 500 people had voted there this morning. A volunteer suggested the rainy weather, which forecasts indicate will continue through the afternoon, could be affecting turnout.

One resident who stopped by Coates to vote with his daughter cited his desire to support local schools as a motivating factor, with a bond referendum that would enable Fairfax County Public Schools to spend $365 million on renovation projects on the ballot.

Kishore Sadala, who has lived near Coates Elementary for over a decade, said she wanted to vote out of a sense of civic duty.

After moving back to Virginia from Maryland to care for her parents, Indya Gordon says she felt it was important to vote due to the more unpredictable nature of Virginia’s elections, with this year’s gubernatorial contest expected to be a nail-biter.

“I think this is one of the most important elections of our time,” she said after voting at Coates Elementary School.

One of only two states with statewide offices on the ballot this year, Virginia is being treated as a bellwether for the national political mood and potential foreshadowing for next year’s Congressional mid-term elections by both Democrats and Republicans.

In addition to choosing either Terry McAuliffe or Glenn Youngkin as governor, voters are deciding the state’s next lieutenant governor, attorney general, and House of Delegates, where all 100 seats are up for election.

The Fairfax County Office of Elections notes that results will be reported slightly differently than they have been in the past.

In accordance with a new state law, results from mail-in ballots will be released first, followed by early vote totals. The results will be updated throughout the night as precincts tally votes cast in-person on Election Day.

While the majority of votes are expected to be included in tonight’s unofficial results, mail-in absentee votes are accepted as long as they arrive by noon on Friday (Nov. 5), so the results will be incomplete.

In addition, the Office of Elections will only be reporting countywide vote totals for each candidate, rather than breaking the results down by precinct. Precinct-level results can be found instead through the Virginia Department of Elections.

“Because precinct level results are still available on the state’s website, we’re focusing on what most people are interested in: the total votes for each candidate — in other words, who’s won and lost,” Worthy said. “However you’ll also see the breakout for each candidate for early and mail-in votes.”

David Taube and Jay Westcott contributed to this report.

After 15 years of treading water, the mixed-use development promised to residents of the MetroWest community south of the Vienna Metro station is finally inching closer to becoming a reality….

Fairfax County housing officials want to assist religious congregations interested in using their existing buildings or land to help create affordable housing. The Fairfax County Board of Supervisors talked about…

Curiosity Doughnuts has closed its store located inside Whole Foods Market at The Boro. The location closed last week due to “unforeseen circumstances” after operating there for years, serving ingredient-conscientious…

Warmer Winter Expected — “According to the National Weather Service (NWS), we will see above normal temps this winter w/ an equal chance of above, near, or below normal precipitation….