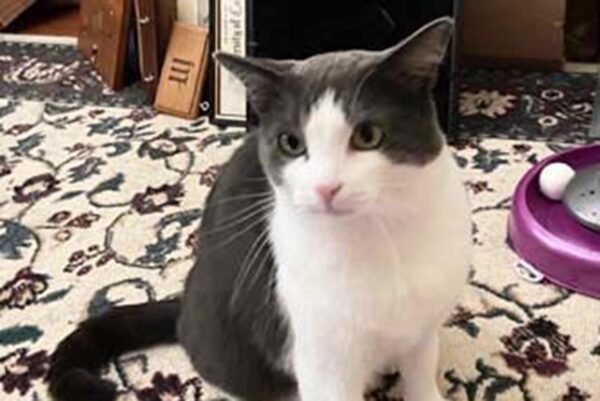 The latest Pet of the Week is Donnie, who was part of a large colony of cats trapped at the Blackthorne Inn in Upperville, Virginia. Donnie’s foster mom describes him as gentle, calm and sweet.

Donnie is from a colony of cats that were trapped at the Blackthorne Inn in Upperville, Virginia. By the time the caretaker (Tom) and office manager (Donna) called for help with the cats, there were over 20 living on the property, and it all started with a single unspayed female cat that someone abandoned.

Here’s what Donnie’s foster mom had to say about Donnie (and she has been doing this a long time):

‘Donnie is the best and gentlest of cats. He gets along with other cats well, too. His purrsonality is calm and sweet. You don’t get them better than this guy. What’s amazing is that he was born outside and except for the company of Tom, his dog Charlie and Donna, he did not have any contact with humans. At first he was afraid but within a couple of weeks he was making great progress.

He has a good appetite so his adopter will need to monitor his food intake. Once he finishes eating, he will go over to another cat’s dish to try to eat their food. Because of this, it is best if he is fed separately or his adopter uses a microchip-sensing automatic feeder. Donnie has very sensitive skin (just look at the pink nose) that reacted to the Revolution. He developed a sore/infection where it was applied between his shoulder blades and had to have a Convenia antibiotic shot.

Donnie is used to living with other cats so he should go to a home where he has a cat friend. In the words of Jackson Galaxy: “I firmly believe that by and large, cats are happier in the company of other cats.”

Donnie was born April 2020. He has been neutered, microchipped, vaccinated and has tested negative for FeLV and FIV.

Are you and Donnie the perfect match?