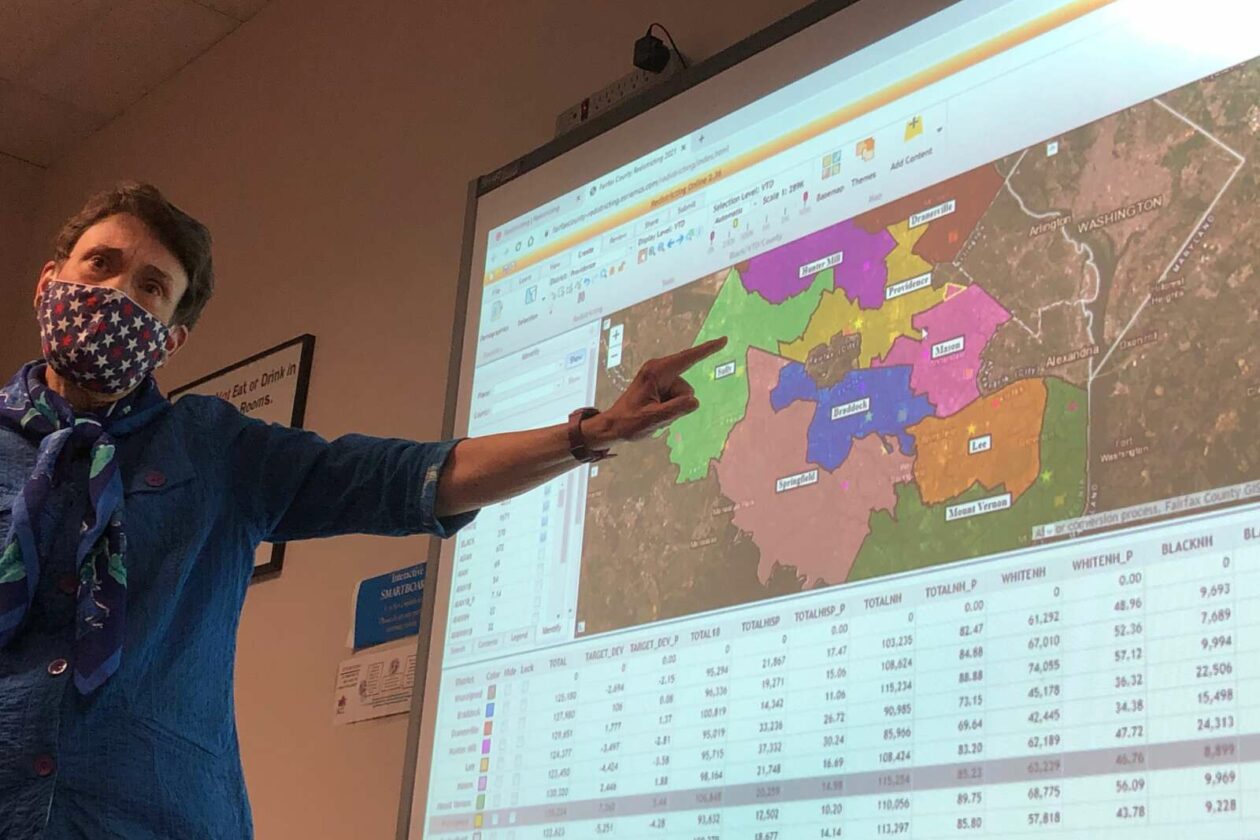 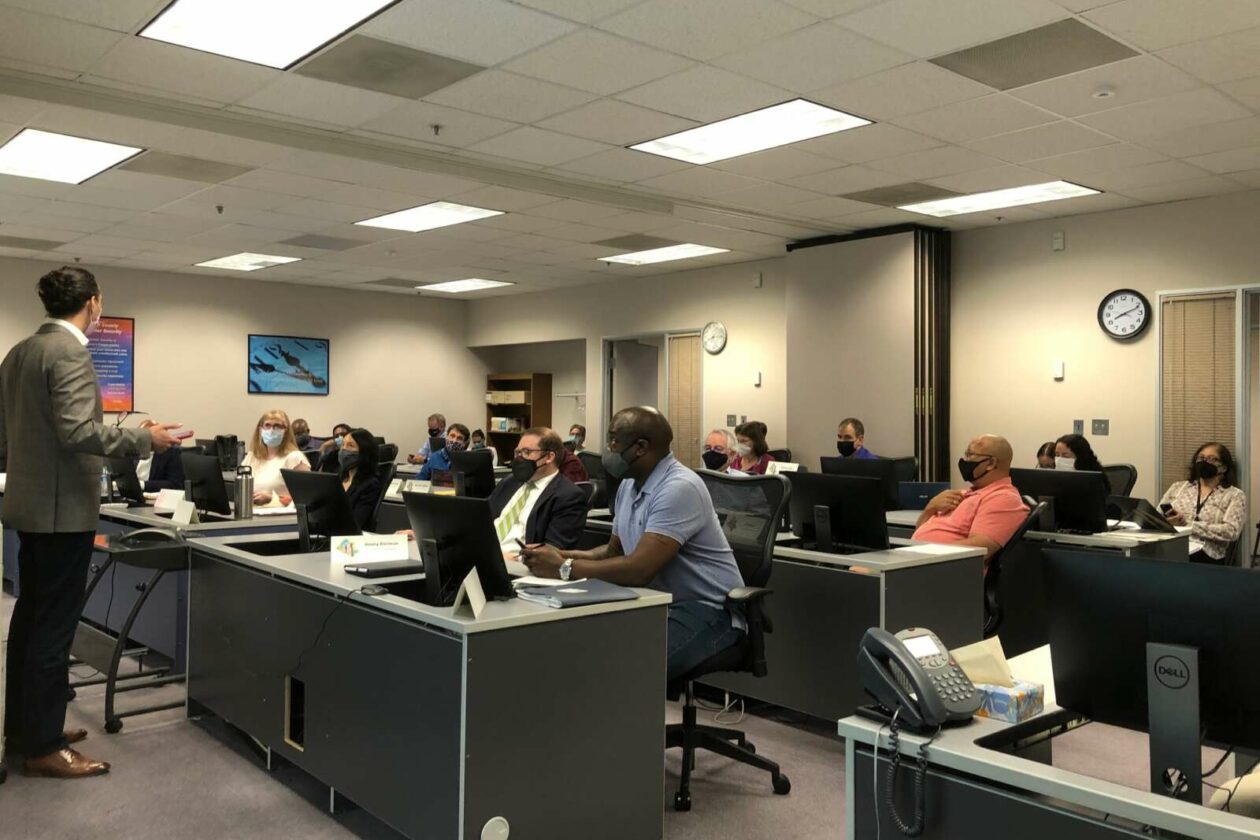 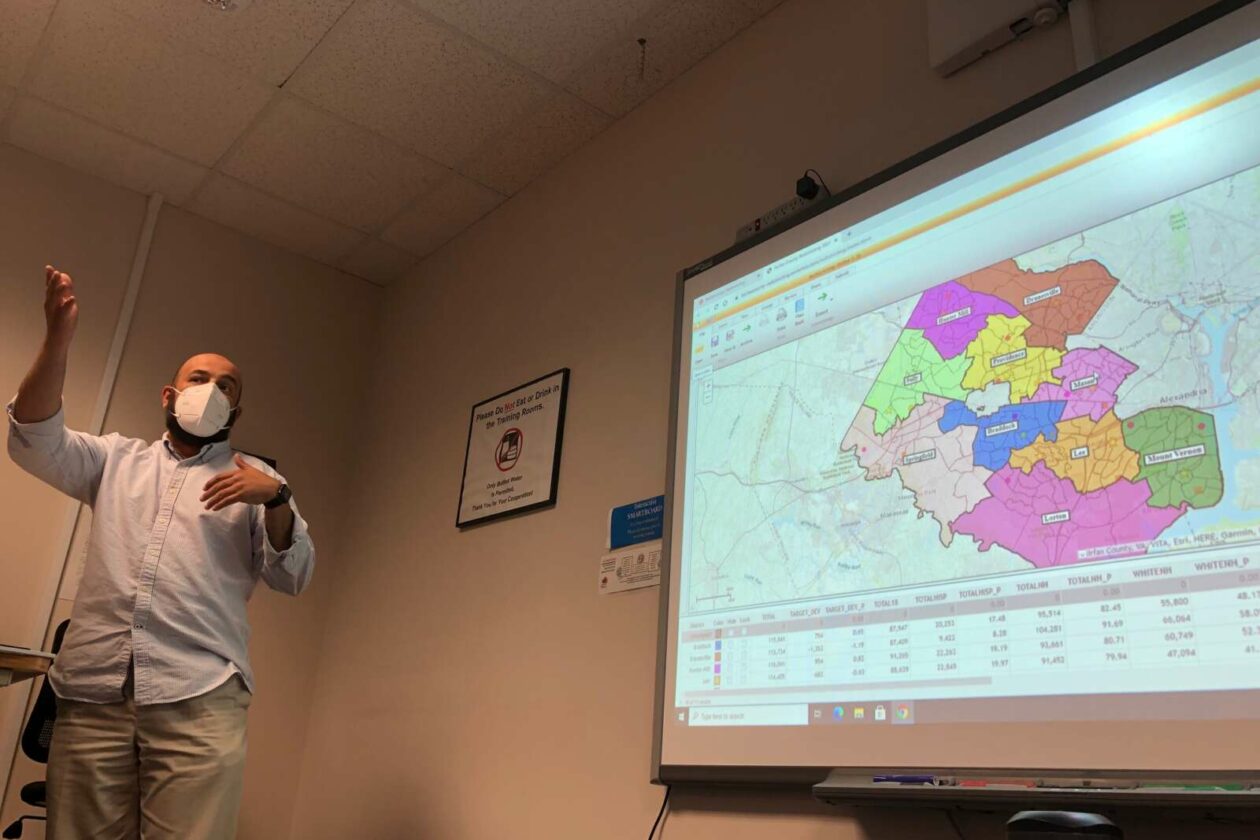 In a meeting room that more resembles a college classroom than the stateliness of the board auditorium just two floors down, 20 volunteers are redrawing the lines that divide and define Fairfax County.

Appointed by the Fairfax County Board of Supervisors on June 22, the 2021 Redistricting Advisory Committee (RAC) has been meeting regularly since late July, but members got their first opportunity on Monday (Sept. 13) to present the district maps they’ve created to determine the county’s leaders for the next decade.

Some members suggested limited changes, moving the Fort Buffalo precinct across the district line from Providence to Mason, for example. Others crafted entirely new districts around Lorton or a swath of Herndon and Chantilly east of Dulles International Airport.

Fairfax County has developed a publicly available mapping tool that allows communities to be realigned with a simple click of a button, but each alteration could have significant implications for what the county will look like in the future.

“These are not just lines on a map,” said Linda Smyth, who now represents Providence District on the RAC and previously represented it on the Board of Supervisors. “It’s about neighborhoods. It’s about people.”

The pressure on this year’s redistricting effort is even higher than usual as the county races to complete a year-long process that has been condensed into roughly five months, thanks largely to coronavirus-related delays in the release of data from the 2020 Census.

The RAC voted on Monday to request a timeline extension after complications in getting adjusted Census data from the Virginia Division of Legislative Services further delayed county staff’s ability to build the online mapping tool that the committee needs to do its work, according to Braddock District Supervisor James Walkinshaw.

Under the schedule originally approved by the Board of Supervisors on June 8, the RAC was expected to finish its work and turn in all the map options they think the board should consider on Friday (Sept. 17).

However, the committee didn’t get the new Census population and demographic data until last Friday (Sept. 10). Prior to that, members had been using old data for training purposes, RAC Chairman Paul Berry says.

“We got the numbers much later in the calendar year than we expected. We would’ve been doing this in the spring if not for the pandemic,” Berry said Monday night. “…The board and Chairman [Jeff] McKay felt it was prudent to give everyone more time to do the work, because we’re all volunteers at the end of the day.”

After a motion put forward by Walkinshaw, the board voted unanimously on Tuesday (Sept. 14) to give the RAC until Sept. 28 to finalize its maps. The initial Sept. 10 deadline for members of the public to submit their own proposed maps has also been extended to this Sunday (Sept. 19).

Board members acknowledged that the new timeline remains less-than-ideal, giving the RAC under two weeks to evaluate its own maps and those from the public, but flexibility is limited by state law, which requires localities to send a redistricting plan to the attorney general for approval by the end of the year.

The need for localities get the attorney general’s approval is a new step introduced by the Voting Rights Act of Virginia, which combats voter suppression and discrimination. The General Assembly adopted the law in April, making Virginia the first state in the U.S. with its own voting rights act, and Gov. Ralph Northam formally signed it on Monday, though it took effect on July 1.

The Board of Supervisors will hold a public hearing on its redistricting plan on Nov. 7 and vote on a final ordinance on Dec. 7.

Conducted every 10 years by state and local governments, redistricting involves drawing electoral district boundaries to ensure each district has about the same population, though gerrymandering has often undermined that goal of equal voting representation.

Fairfax County’s newly drawn districts must meet several legal and policy criteria, including standards for compactness, a maximum 10% deviation in the populations of the most and least-crowded districts, and compliance with voting rights protections.

The Board of Supervisors also adopted rules to consider existing geographic, political, and voting precinct boundaries as well as “communities of interest” — neighborhoods or areas where residents share “social, cultural, and economic interests.”

Balancing the different criteria is one of the primary challenges facing the Redistricting Advisory Committee.

For instance, Saif Rahman, who represents the Arab American community on the RAC, proposed a map with a 10th “Lorton” district where all the districts had less than a 2% standard deviation in their populations.

Achieving that uniformity, however, required bumping the Springfield District Office out of Springfield and removing Mount Vernon from its eponymous district to create the new Lorton district, among other tweaks.

Because of the groups’ different timelines, the RAC also can’t refer to the work of the new Virginia Redistricting Commission, which was been hampered by partisan conflicts and last-minute process changes in its efforts to draw new House of Delegates and state Senate districts.

“I wish that they could finish first and that we could then do our work, because that would make it easier for us to align magisterial districts around the House and Senate maps,” Berry said. “That alignment, in my opinion, it’s less confusing for people who vote and live and work in these areas.”

As if redistricting wasn’t ambitious enough, the RAC also waded into the ongoing debates on renaming county landmarks with ties to slavery or the Confederacy, agreeing on Monday to include a passage in its report supporting a future reevaluation of the names of Fairfax County’s magisterial districts.

The committee’s discussions focused on Lee and Sully districts, which are respectively named after Confederate general Robert E. Lee and an 18th-century slave plantation, but the report will have broader language that doesn’t mention specific districts.

“We’ve been tasked by the Board of Supervisors to redraw the magisterial districts,” Berry said. “It seems very natural to me that we would, in addition to that work, add in, in the interest of equity, a recommendation that says we need to open up the naming discussion formally after our process is done.”