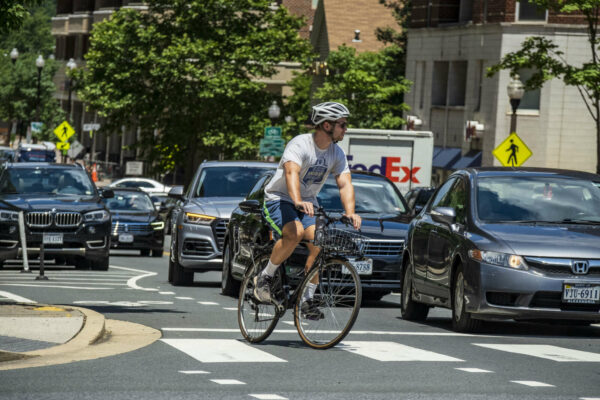 Around noon on June 12, a pedestrian trying to reach a pathway by Dogwood Pool on Green Range Drive in Reston was nearly hit by a vehicle, because the trail was blocked by parked cars.

Three days earlier, another driver failed to yield and sped through a left turn at the Westpark and Galleria Drive intersection in Tysons, almost colliding with a person who was using the crosswalk.

Those are two of more than 350 “near miss” traffic incidents that community members have reported to Northern Virginia Families for Safe Streets (NoVA FSS) since the advocacy group launched a survey on June 17 to collect data on dangerous roadways across the region.

Developed with the help of Virginia Tech graduate students, the Near Miss Survey allows walkers, bicyclists, drivers, and other road users to report instances where they came close to getting into a crash or accident but were fortunate enough to avoid it.

The resulting map highlights specific incidents as well as hotspots that are especially accident-prone, with the goal of helping local transportation and public safety officials see what areas need their attention and how they can improve policies and infrastructure to make streets safer.

“It gives people an opportunity to report on areas that might be dangerous,” Phil Kemelor, the Mason District board member for Fairfax Families for Safe Streets, said. “Just because it doesn’t result in a specific accident like with someone getting hit or killed, it’s still something people should know about.”

While the survey is still new, some trends have already emerged. Unsurprisingly, there tend to be more incidents at times with more traffic, such as the afternoon rush hour, and failure to yield to pedestrians in crosswalks is the most frequently reported issue.

Kemelor notes that the reported incidents haven’t been weather-related, since they’ve all occurred during clear conditions, and they are rarely one-time issues.

“Those reporting the incidents cite multiple occurrences at the locations mentioned,” he said.

The Near Miss Survey project grew out of conversations between NoVA FSS founder Mike Doyle and Tom Sanchez, who teaches urban affairs and planning at Virginia Tech.

As a capstone requirement for the master’s program, graduate students take a year-long studio class where they work on a project with a client from the community.

For the 10 students who took the class during the 2020-2021 academic year, that client was Families for Safe Streets, which began in the City of Alexandria in 2017 and has since added Arlington and Fairfax chapters.

Sanchez says the idea of collecting near-miss data appealed to the class, because there was no existing source for that kind of information, even though a split second could be the only difference between a close call and a tragic collision.

“Even though [a crash] didn’t happen, it could’ve easily,” Sanchez said. “So, it’s a very good indicator of where there may be, say, bad street design or poor visibility or bad signage or lots of other potential problems.”

Limited to Zoom meetings due to the ongoing COVID-19 pandemic, the students built the mobile platform that collects, analyzes, and maps the near-miss data over the course of two semesters.

Now that the platform is online, the focus has shifted to giving NoVA FSS the resources maintain it indefinitely and raising awareness about the tool. One of the biggest challenges for NoVA FSS so far has been figuring out ways to incentivize people to report an incident, Sanchez says.

“You’re on your bike or you’re walking and you almost get hit by a car. You’re not thinking, hey, I need to get on my phone and I need to record that information. You’re thinking…I’m glad I didn’t get hurt,” he said. “So, part of their campaign to increase the visibility of [the survey] is really to get the word out about…this benefits us all if we can gather this information and map it and highlight where some of these dangerous places are so we can go out and fix it.”

In addition to encouraging community members to share the survey link, NoVA FSS has reached out to local officials to discuss the project. The Fairfax chapter, for instance, recently had a call with the Fairfax County Police Department to let them know about the collected data.

The FCPD says its traffic safety division uses record management systems and “a variety of open sources” like the near-miss survey to monitor traffic incidents and crashes. That data gives police a better understanding of existing trends and helps them develop enforcement strategies.

“We are fortunate to have great relationships with our community partners,” the department said in a statement. “One of our second lieutenants from our traffic safety division attends monthly meetings with the Northern Virginia Families for Safe Streets to share our data and hear their concerns. We would encourage community members to reach out to their district station for any traffic enforcement requests.”

The Virginia Department of Transportation’s Bicycle and Pedestrian Program coordinator has also been in touch with NoVA FSS and “looks forward to continued information and data sharing,” VDOT spokesperson Kathleen Leonard says.

She noted that VDOT has a form where people can report roads and sidewalks that are blocked or in need of repair and a Pedestrian Safety Action Plan Map that identifies “priority corridors” based on crash data.

NoVA FSS says the data collected by its near-miss survey will help inform its advocacy efforts around infrastructure improvements, traffic laws and regulations, and other aspects of road safety, with the ultimate goal of achieving Vision Zero and eliminating all traffic fatalities and injuries.

“The survey, it’s open,” Kemelor said. “We just want as many people to know about it to put their information into it.”