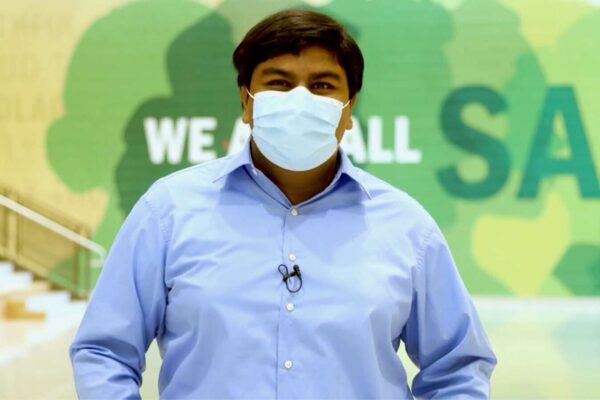 Now, the rising senior at Langley High School is the next student representative to the school board.

Elected by the countywide Student Advisory Council to serve a one-year term, beginning July 1, he will participate in board meetings as a nonvoting member, filling the position currently held by Nathan Onibudo, a senior at South County High School. He will be the school board’s 51st student representative.

Choudhary aims to be a voice for students on issues affecting his peers, including how Fairfax County Public Schools delivers instruction to students enrolled in different programs and supports students struggling with their mental health or who have disabilities.

He also hopes to carve out more spaces for students to use their voices.

“If you don’t have a seat at the table, you’d better pull over a chair and sit yourself down to make your voice heard,” he said. “[That’s] why I want to expand student voice opportunities across the county.”

He has experience amplifying student voices as a member of the Superintendent’s Student Advisory Council and as the co-founder of Virginia Teen Democrats.

“We didn’t see a space for teens in the Democratic Party of Virginia and in Virginia Democratic politics,” he said. “VATD has taught me how to organize [and] how to make sure that everybody is pulling their weight.”

Choudhary argues that student voices will be critical to overcoming the educational gaps that FCPS sees based on race, socioeconomic status, and English language proficiency.

He says FCPS should also examine differences in the kinds of experiences students get depending on whether they’re in the Advanced Academic Program, general, and honors education, such as the extra field trips available to AAP students.

“We often talk about equity in this broad, intangible sense, but we don’t talk about what that means and what that looks like,” he said.

He also sees room for more student participation in deciding what services schools must provide to students with disabilities — codified in an Individualized Education Plan — a conversation mostly directed by parents, teachers, and specialists.

“There is a lack of students’ voice in the IEP process,” he said. “Ensuring everyone can be heard and that their individual needs are met is beyond vital.”

That also means “proactively monitoring the environment in which students are being put day-to-day” to look for signs of depression and suicide, he says.

Choudhary first set his sights on becoming a student rep during his sophomore year after attending school board debates and forums and talking to candidates.

That initial bid was unsuccessful, but as a junior, he became the Langley SAC delegate. Those experiences — and talking to past student reps — have taught him that school board politics can “get messy.”

“1,o00% of the time, every day of the week, I will take doing something that is not so popular but is to the benefit of all FCPS students over something that looks good but doesn’t do that much,” he said.

To fix FCPS’s structural challenges — from educational gaps to mental health outcomes — the board must convert proposals into practice and find the political will and the resources to carry those plans out, he says.

“We can’t play the political game of dancing around the issue and talking about it while not tackling that issue,” he said.

When asked about his favorite subject, Choudhary could not name one. Instead, he rattled off what he loves about geography and geopolitics, modern history and data science, English and journalism, science and math.

“No matter what area I go into, being able to turn it into something beyond myself for the benefit of someone else is how I can make those passions meaningful,” he said.

END_OF_DOCUMENT_TOKEN_TO_BE_REPLACED

More Stories
McLean Central Park redesign could include a dog park, amphitheater, and moreStay in the know with the Tysons Reporter daily newsletter