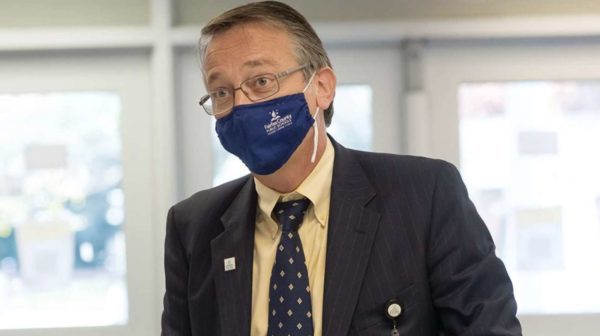 The opportunity to get four days of in-person classes has been extended first to the pre-kindergarten through 12th grade students who have been experiencing the most significant challenges in virtual and hybrid learning.

FCPS says school personnel identified these students using the school system’s Multi-Tiered Systems of Support model, which takes into account students’ behavior and social and emotional well-being as well as their academic success.

“I am thrilled to announce that FCPS is continuing to move forward with bringing back additional students to in-person learning — particularly our students who are experiencing the greatest learning challenges,” Brabrand said. “Overall, we see this as very good news for FCPS students, families, staff, and the community and will help us prepare for five days of in-person instruction this fall.”

Brabrand told the Fairfax County School Board on March 16 that FCPS could expand in-person learning to four days on a limited basis after spring break, with the goal of providing more support to students with disabilities, English-language learners, and others who have especially struggled this year.

To ensure that there would be sufficient capacity, FCPS required students who opted for some in-person learning to confirm that they were attending school regularly by March 26, the day before spring break. If they were not in class, they risked being reverted to all-virtual instruction.

FCPS spokesperson Lucy Caldwell says that the school system does not have an exact figure for how many students were sent back to virtual learning, but those decisions were handled on school-by-school basis.

The expansion of in-person learning comes even though FCPS is instructing all staff and students at middle and high schools to maintain six feet of social distancing, citing Fairfax County’s high rate of community transmission of COVID-19.

The U.S. Centers for Disease Control and Prevention updated its guidance for schools on March 19 to recommend at least three feet of social distancing in classrooms if everyone wears a face mask. However, the federal agency also said that middle and high school students should be at least six feet apart in communities with high transmission levels.

“This recommendation is because COVID-19 transmission dynamics are different in older students — that is, they are more likely to be exposed to SARS-CoV-2 and spread it than younger children,” the CDC said.

The CDC determines community transmission levels primarily based on testing positivity rates and the number of new cases per 100,000 people over the past seven days. Fairfax County has recorded 103.4 new cases per 100,000 people in the past seven days, and 5.2% of all PCR tests have been positive, as of the week of March 27, according to the Virginia Department of Health’s school metrics dashboard.

Caldwell says that the ability of schools to accommodate four days of in-person learning varies widely based on current occupancy, the size of classrooms and lunchroom spaces, furniture, and staffing.

“Some of our schools DO have open space,” she said in an email to Tysons Reporter. “Some students who were expected to come back in-person did not; school staff reached out to those families who’s students did not show up and ascertained whether or not we might have open seats through those discussions. We are addressing these open seat opportunities now.”

In-person attendance currently ranges from 20 to 80% depending on the specific school, according to Caldwell, who also noted that staffing levels could become insufficient if employees need to quarantine.

As of Monday, FCPS has recorded 1,253 COVID-19 cases since Sept. 8, including 660 cases among staff and 440 among students. Public health officials are currently investigating outbreaks at McLean High School, South Lakes High School, and the Word of Life Christian Academy, according to VDH.

“Each school is working within their own capacity to accommodate additional in-person opportunities for students whose families have already expressed a desire for them,” Caldwell said.