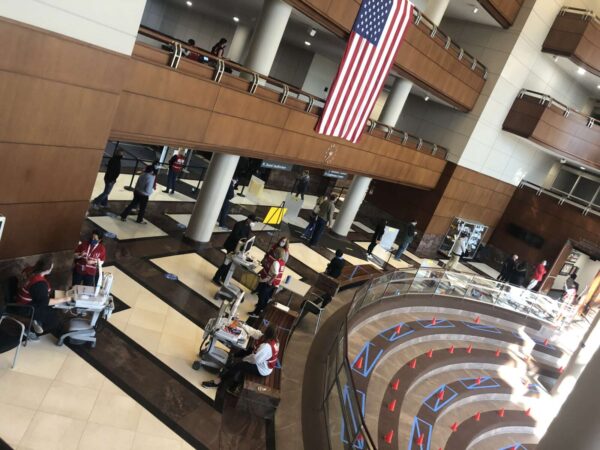 Fairfax County is committing to expanding COVID-19 vaccine eligibility to all adults by April 18, as long as there is sufficient supply, county officials tell Tysons Reporter.

This comes on the heels of Virginia Governor Ralph Northam’s announcement earlier today (April 1) that all individuals in the Commonwealth over the age of 16 should be eligible for the vaccine starting Sunday, April 18.

“I know that our residents are looking forward to getting vaccinated and to be able to again spend time with their loved ones,” Fairfax County Board of Supervisors Chairman Jeff McKay said in a statement to Tysons Reporter. “Fairfax County is ready and prepared to move forward to meet the Governor’s and President Biden’s deadlines. I’m excited that we can continue to open eligibility and vaccinate even more people.”

The April 18 goal is ahead of the May 1 deadline set by President Joe Biden in mid-March for making all American adults eligible for the vaccine.

Governor Northam’s press release notes that this is because the state is making solid progress on delivering the vaccine to currently eligible populations.

“Nearly every Virginian in the highest risk groups who has pre-registered for a vaccination appointment has received one, and those still on the pre-registration list will receive appointment invitations within the next two weeks,” the governor’s office said.

The release also says that nearly 4 million doses of the vaccine have been administered in the Commonwealth. More than one in three adults have gotten at least one dose, and one in five are fully vaccinated.

21 out of 35 Virginia’s health districts have also moved to Phase 1c, which encompasses additional essential workers like food servers and construction workers.

After opening eligibility for all people in Phase 1b earlier this week, Fairfax County officials now say that the plan is to move to Phase 1c sometime next week to meet Northam’s target date as well as Biden’s expectation that 90% of adults in the U.S. will be eligible to get vaccinated by April 19.

“To meet these goals, Fairfax County plans to open registration for Phase 1c early next week and transition to Phase 2 by the governor’s deadline,” the Fairfax County Health Department said in a newly published blog post.

The health department previously predicted that the county would enter Phase 1c in mid-April.

According to the county dashboard, 363,601 people have been vaccinated by the county health department or one of its partners — a nearly 10% jump from two weeks ago.

That’s approximately 32% of the county’s population, which is slightly lower than the overall percentage of Virginia residents who have been vaccinated based on the governor’s release.

As for when those eligible to register will get appointments and actual shots, that remains to be seen. The health department is currently making appointments for people who registered on March 24 and has gotten its waitlist down to less than 30,000 people.

Earlier in March, Virginia’s Vaccine Coordinator Dr. Danny Avula said that everyone who wants the vaccine should be able to get their first dose by May 31.

However, Fairfax County could not commit to that goal at the time. A health department spokesperson Reston Now on Tuesday that the pace of vaccine administration will depend on “many factors,” including the number of doses that the county gets from the Virginia Department of Health.