First, the council voted unanimously on March 22 to approve an additional $61,000 for the town’s Park Street NE sidewalk project, which will close an approximately 850-foot gap between Ayr Hill Avenue and Albea Court NE with five-foot-wide concrete sidewalks, including curb and gutters.

In the works since at least 2016, the project’s total estimated cost of $855,104 is being funded by a Virginia Department of Transportation transportation alternatives grant. The grant requires a 20% local match, which Vienna is providing through its Northern Virginia Transportation Authority funds.

The additional $61,000 is needed to pay a contracted construction management firm Whitman, Requardt & Associates for right-of-way services. The project will require 10 temporary property acquisitions to accommodate construction, according to a scope-of-work document from the town.

Vienna Director of Public Works Mike Gallagher says the town previously expected to be able to handle the right-of-way process on its own or with “limited consultant help.”

“For town and state projects, we’re very fortunate in the town. The citizens and adjoining property owners routinely sign temporary easements if it’s necessary,” Town Attorney Steven Briglia said. “Most times, we just use right-of-way agreements so it’s not recorded and a cloud on their title.”

However, this project requires more formal right-of-way agreements, even though the takes aren’t permanent, because the VDOT grant includes federal funding. That means it has to adhere to the “complicated and time-consuming” process set by the Uniform Relocation Assistance and Real Property Acquisition Policies Act, Vienna town staff say.

Gallagher assured the town council that the public works department will not need any more money for the Park Street sidewalk project, stating that the new funding request is likely for more than they will actually need.

“I know that the project is budgeted higher than what we projected the cost to be, so there’s sufficient funds,” he said.

The Vienna Town Council also approved a $1.4 million construction contract for a project to replace an existing asphalt trail on Old Courthouse Road with approximately 500 linear feet of concrete sidewalk, closing a gap between Gosnell Road and Pine Valley Drive. 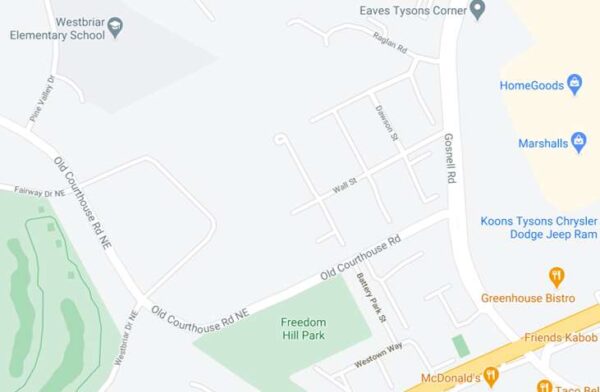 The project will also add curbs and gutters with drainage improvements to eliminate a ditch alongside the roadway.

The contract went to Sagres Construction, which submitted a bid of roughly $1.2 million, the lowest amount out of the six vendors that responded to the town’s invitation to bid. The approved funding includes a 10% contingency.

Initiated in 2013, the Old Courthouse project is divided into two phases since a portion of the road extends outside of town limits into Fairfax County. The Vienna Town Council approved an agreement with the county to get $2.3 million for construction funding in January 2019.

The Town of Vienna has prioritized filling in gaps in its sidewalks to improve the town’s walkability. A gift from the late Councilmember Maud Robinson enabled the town to establish a dedicated fund for sidewalk construction, though the Park Street and Old Courthouse projects don’t qualify since they are getting funding from elsewhere.

The town council also voted in February to require developers of single-lot properties to construct a sidewalk regardless of whether sidewalks exist on adjacent lots.