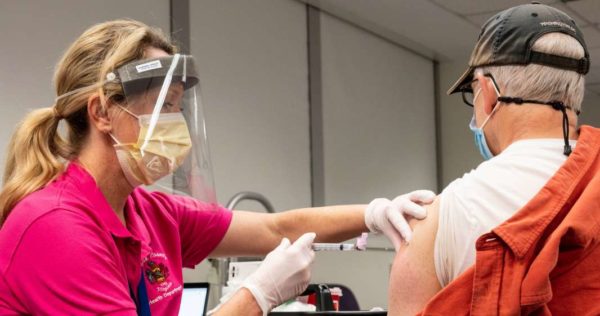 In order to improve transparency, Fairfax County plans to launch a new queuing system tomorrow that will provide information about vaccine registration status.

At a Fairfax County Board of Supervisors meeting earlier this week, County Executive Bryan Hill said the system will be followed by a dashboard with real-time information about vaccine distribution.

“They know that the county has information about where they are in the queue and that the county currently is not sharing that information with them,” Foust said during the board meeting on Feb. 9. “They believe the county should be more transparent. They want to know, and I believe they deserve to know, how many people are ahead of them to be called to be vaccinated.”

While the registration process is relatively smooth, Foust said that residents should stay informed about where they are in the line for an appointment to get vaccinated. The Fairfax County Health Department currently only sends a notification confirming that an individual has registered.

As of Wednesday (Feb. 10), 131,479 people in Fairfax County have received the first dose of the vaccine, and 31,421 people have been fully vaccinated. Officials continue to caution that vaccine supply is extremely limited. Roughly 11% of Virginia’s total population has gotten at least one dose.

The queuing system will confirm if registrants are in the queue, describe progress made so far, and inform registrants of where they are in the line.

The county also plans to launch a self-cancellation form if people receive a vaccine from another health care provider, as well as an online form for residents to confirm their registration and see where they fall in the queue.

Hill said that his staff and the county’s health and IT departments began working on improving the process in early January, but the process was stalled by challenges in coordinating with the Virginia Department of Health.

“A lot of our delay is predicated on working and talking with the state’s systems,” Hill said, adding that the state’s protocol is the “Bible for COVID vaccinations.“

Board of Supervisors Chairman Jeff McKay also noted that coordination with the state has been “frustrating” to the county’s efforts.

“It is not acceptable for someone to register for a vaccination and go an entire month without hearing potentially anything from the county,” he said.

While upgrading its system, the county found roughly 25,000 duplicate registrants on the waiting list. The county was able to trim the list down to around 180,000 registrants by weeding out the duplicates.

Still, other board members lauded the county for its system to administer the vaccines. Mason District Supervisor Penny Gross noted that some residents who were frustrated with the registration process said the actual administration of the vaccine was easy and well-done.

The county’s vaccine dashboard will likely go live on Friday, but it could take up to Tuesday (Feb. 16) to iron out any issues, Hill said.