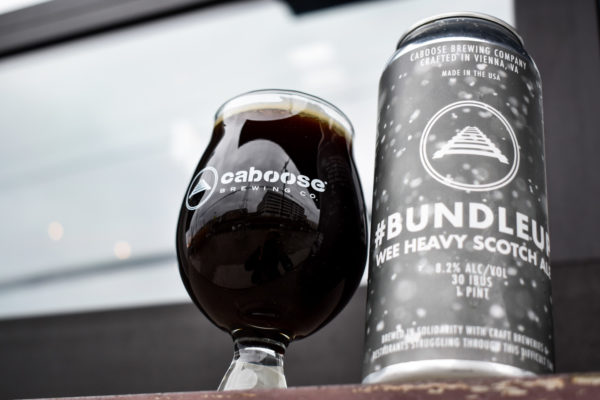 Eating outdoors may not sound especially appealing when temperatures are hovering in the 30 to 40-degree range, but that is exactly what some local restaurants are urging patrons to do so they have a chance of outlasting a grueling winter.

With COVID-19 still limiting people’s ability and willingness to dine inside, Caboose Brewing Company, which runs Caboose Tavern in Vienna and Caboose Commons in Merrifield, joined forces with Reston’s Lake Anne Brew House in December to launch the #BundleUp campaign.

The grassroots initiative encourages customers to don blankets and winter clothing so they can eat and drink outside. It is open to all restaurants, breweries, coffee shops, and other food establishments, though the organizers are not keeping a tally of everyone who’s participating.

“A lot of people feel safer when they’re outside with people, so I think it’s catching on,” Caboose Events and Marketing Manager Courtney Beazell said. “It’s getting the response that we wanted. We’re hoping that more people will continue to promote it and continue to use it.”

Over the campaign’s two months of existence, it has evolved to include a “collaboration brew” that Caboose is offering to other restaurants and bars, along with a Bundle Up bike ride.

According to Beazell, Lake Anne Brew House owner Melissa Romano proposed developing a brew to spread the word about the Bundle Up campaign. Caboose was already planning to sell a “Wee Heavy” scotch ale for the winter before realizing that the new brew would be a perfect fit for the campaign.

The brewery started canning the ale on Jan. 5, producing 36 cases to sell to restaurants, breweries, and bottle shops. Wee Heavy is also available to customers on tap at Caboose Tavern.

Caboose sold out its supply, with buyers coming from across Northern Virginia and even as far away as Richmond, but the recipe is available on the company’s website for any breweries still interested in participating.

The Bundle Up bike ride came out of a similar spirit of cooperation.

Cyclists can get a free gift at the brewery of their choice if they collect a stamp with a purchase at each of the participating breweries: Caboose Tavern, Lake Anne Brew House, Bike Lane Brewing, and Old Ox Brewery. All of the venues are in close proximity to the W&OD Trail.

Even with the Bundle Up promotions, though, McLaughlin admits that business has been tough this season and does not anticipate much relief until the weather warms up in the spring.

“This winter has been as difficult as we expected it to be,” McLaughlin said. “We’ve had a couple of nice Saturdays, which has been helpful, but that’s not enough to support a restaurant.”

To shore up Fairfax County’s restaurant industry through the winter, local governments have loosened regulations around outdoor dining, while chambers of commerce have organized promotional events like restaurant weeks.

The Town of Vienna Economic Development Office is providing media and marketing support to the Bundle Up campaign, and the town will hold its own restaurant week from Feb. 14 to 21.

“Caboose is a great example of how businesses have worked to creatively market themselves to customers and clients during this pandemic and especially during the winter season,” Vienna Economic Development Manager Natalie Monkou said.

Monkou says Vienna Restaurant Week will kick off a series of campaigns and promotional events to “encourage the public to shop local and support the Town’s small and independent businesses.”