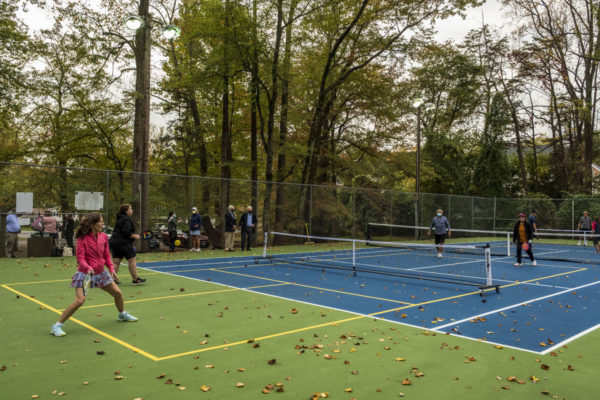 The county is seeking to gauge the public’s support for pickleball, a new and rapidly expanding paddleball sport that combines elements of badminton, table tennis, and tennis.

The Fairfax County Park Authority has launched an online survey to gauge support for new pickleball activities. The survey is open through Jan. 24. County officials say they’ve received multiple requests to expand the number of pickleball facilities in its parks, recreation centers, and community centers.

The game was invented in 1965 by two dads in Washington who wanted to entertain their kids and use an old badminton court.

A feasibility study is underway on how to address the desire for the sport, identify sites for possible improvements or new facilities, and develop criteria and design guidance used for selecting and constructing pickleball amenities.

Now boasting 179 members, the group successfully convinced the Town of Vienna to turn the Glyndon Park tennis courts into hybrid tennis/pickleball courts when they underwent renovations earlier this year.

However, Fairfax County currently does not have any facilities specifically for pickleball. The closest dedicated facility is Pickleballerz, which opened in October in the Loudoun County portion of Chantilly.

The county’s feasibility study will be completed by the spring of 2021. Currently, the county has 15 parks with either a tennis or basketball court lined for pickleball. Within those parks, there are 28 courts available to play the game.

END_OF_DOCUMENT_TOKEN_TO_BE_REPLACED

More Stories
A Guide to Recycling Your Christmas TreeWeekly Planner: Flashback to the ’80s, Coat Drive, and Sit and Sip