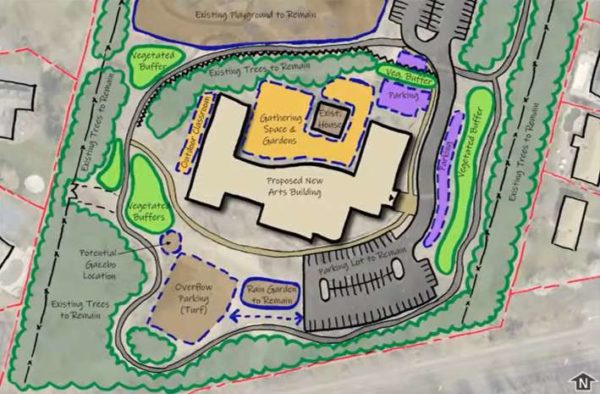 The Fairfax County Park Authority is exploring the possibility of revising its master plan for Clemyjontri Park in McLean to allow for a proposed arts center from the McLean Project for the Arts.

Park Authority staff kicked off the process last week with a virtual public meeting on Dec. 17, when MPA Executive Director Lori Carbonneau presented conceptual renderings for the proposed arts center and detailed how it would align with Clemyjontri’s core mission of providing a playground for children of all abilities.

“We have a vision of a natural marriage of art and the outdoors that this center can create,” Carbonneau said. “It’s going to celebrate our natural heritage, and it’s going to offer a way to extend the vision [property donor Adele] Lebowitz had of creating a place where all can play.”

The overall plans for the arts center have not changed since the public’s first glimpse of the project in February. If approved, it would house three galleries, studio classrooms, staff offices, and an outdoor event space, potentially with gardens and public artwork.

However, what was initially envisioned as a campus with multiple pavilions has now been consolidated into a single building, a change that Carbonneau says came out of talks with prospective architectural and engineering firms that toured the park on Mar. 12.

In addition to lowering maintenance costs, having just one building would make security and cleaning easier, and MPA would only have to invest in one central heating, air conditioning, and ventilation system, a concern that emerged as the COVID-19 pandemic has highlighted the importance of proper indoor ventilation.

Carbonneau and Park Authority staff emphasized that the project is still in its infancy, meaning that it’s too early to give concrete answers to many questions, including the potential cost to its impact on parking and traffic.

When asked about potential plans to address existing issues with crossing Georgetown Pike, Ryan Stewart, the chief of long-range planning for the Park Authority, said the agency will consult with the Virginia and Fairfax County transportation departments throughout the master planning process.

MPA would schedule arts center programming around peak park usage, with exhibition openings and other special events generally taking place between 7 and 10 p.m., according to Carbonneau, though the organization has not studied park usage beyond publicly available data.

“During COVID, any analysis would be unsatisfying because of the very different traffic patterns that we’re all experiencing right now,” Carbonneau said. 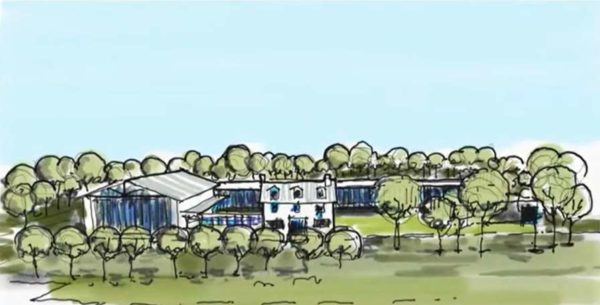 In order to construct an arts center at Clemyjontri, Fairfax County needs to revise the third phase of its master plan for the park, which was built on land donated to the Park Authority in 2000 by the Lebowitz family on the condition that it feature an accessible, barrier-free playground.

Approved in 2002, the master plan divides Clemyjontri’s development into three phases. The first phase introduced the playground facilities, while the second phase expanded the availability of parking, renovated a barn on the site, and created a walking trail.

The third phase calls for the house and surrounding gardens to be turned into spaces for events, such as weddings, community meetings, and limited music performances.

County staff are currently looking for public input on MPA’s proposal so they can present a draft plan to the Park Authority board in March. If a revision is approved, the project will still have to go through the county’s 2232 and special exception processes, which can take anywhere from six to 18 months to finish.

Carbonneau says MPA also hopes to launch a capital campaign after the master planning process to raise private funds for the project.

Dranesville District Supervisor John Foust expressed support for MPA’s plans, praising the nonprofit for creating a sense of culture and community in McLean.

“I’m confident that, if given the chance here at Clemy, they will pull this off and make it quite a success,” Foust said. “The caveat is that whatever they do, whatever anybody does at Clemy cannot adversely impact the park that is a fundamental essence of Clemy as a park for kids with disabilities.”

MPA provides programming and education to people with developmental disabilities through its ArtReach initiative, and the organization recently started working with students in McLean High School’s Best Buddies program.

Carbonneau says MPA has been talking to the nonprofit ServiceSource about how the potential Clemyjontri arts center could involve people with disabilities through events and classes.

“It’s authentically in line with Ms. Lebowitz’s intentions and our longstanding operating practices and priorities, so it’s a very natural fit for us there,” Carbonneau said.