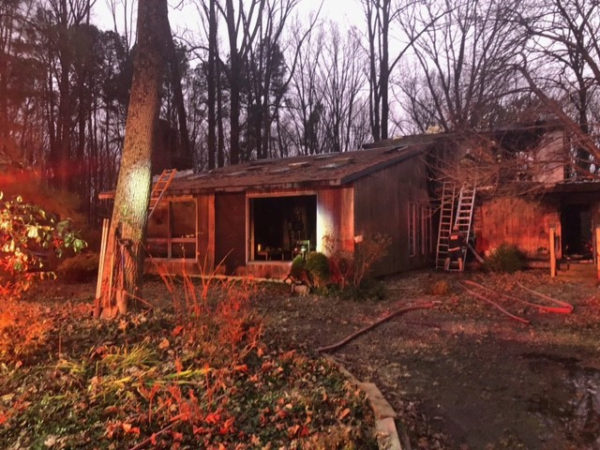 Three occupants of a house in the 1000 block of Towlston Road in McLean have been displaced by a fire that occurred on Sunday (Nov. 22), the Fairfax County Fire and Rescue Department reported today.

Emergency responders were dispatched to the two-story, single-family home at approximately 1:56 a.m. Fire was showing through the front door when units arrived on the scene.

Since the area had a limited number of fire hydrants, responders requested a tanker task force, and additional FCFRD units were brought to the area, along with fire and rescue crews from Montgomery County.

“Crews initially knocked the fire down from the outside,” FCFRD says. “They then entered the home to extinguish the fire.”

No civilian or firefighter injuries were reported.

Three residents of the house were home at the time of the fire, which they discovered in the basement upon smelling smoke. FCFRD says it did not find evidence of working smoke alarms.

The fire has displaced the three occupants, who accepted the Red Cross assistance that was offered, and it caused approximately $115,000 in damages.

“The cause of the fire is currently under investigation,” Fairfax County Fire and Rescue says.