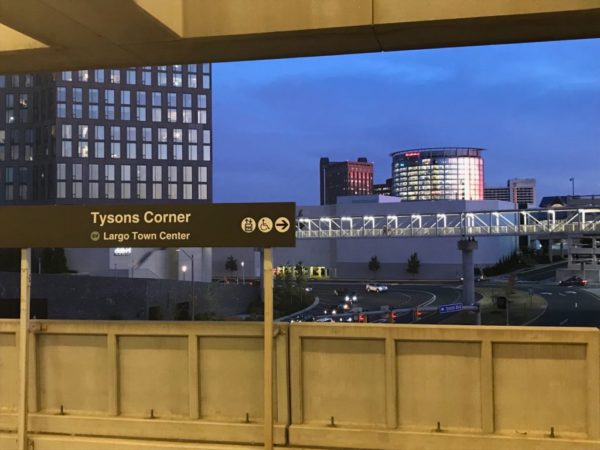 The Washington Metropolitan Area Transit Authority Board of Directors voted on Thursday (Nov. 19) to grant Fairfax County’s request to drop the “corner” from the name of the Tysons Corner Metro Station.

The board simultaneously approved a name change for the Prince George’s Plaza Metro Station in Maryland. That station will now be called Hyattsville Crossing.

The name changes were approved despite the results of surveys of riders and members of the public that found most respondents “significantly preferred” the stations’ current names over the proposed replacements, according to a report by WMATA’s safety and operations committee.

“History with Metrorail Station naming informs us that our riders and the communities we serve develop attachments to rail station landmarks and resist change,” WMATA staff said in the report.

For the Tysons station, only 36% of the online public survey’s 5,508 respondents said they like “Tysons” as a station name, compared to the 45% who disagreed and the 67% who said they like the name “Tysons Corner.”

However, 62% of respondents agreed that the name “Tysons” is easy to remember, and 58% said it would not be easily confused with other station names. 48% said the name clearly conveys the station’s location, and 47% said it describes the location well, surpassing than the 35% and 36%, respectively, who disagreed with those statements.

While the affirmative percentages are higher in all categories for Tysons Corner than they are for Tysons, those results are evidently positive enough that WMATA staff believes objections to the name change will dissipate once community members become familiar with the new moniker.

“Six in 10 survey respondents found the name [“Tysons”] easy to recall and not confusing with other names,” the staff report says. “Should the Board wish to approve the jurisdiction’s request, it is likely that the new name will become synonymous with the surrounding community over time and customers will find it sufficient for wayfinding.”

All of the Metro directors who were present for the vote supported the name changes, except for District of Columbia First Vice Chair Stephanie Gidigbi, who cited concerns about the public feedback when opting to abstain from the vote.

According to the safety and operations committee report, Metro is planning systemwide signage and rail map changes in preparation for the second phase of its Silver Line service, which is not likely to start service until next summer.

With a Dec. 31 deadline for signage changes to be finalized, the Fairfax County Board of Supervisors requested that Metro rename its Tysons Corner station as part of the county’s ongoing efforts with the Tysons Partnership to rebrand the area around the Tysons Corner Center mall as Tysons.

The Board of Supervisors has also asked Metro to rename the West Falls Church-VT/UVA Metro Station to reflect that the University of Virginia no longer has facilities nearby as of April 2020.

Like Prince George’s County, Fairfax County has committed to funding the $332,000 needed to change signage at the affected stations, according to WMATA.