Amidst national calls for transparency and accountability in policing, the Fairfax County Police Department is launching a new interactive data dashboard.

The tool, which is based on Geographic Information System mapping, houses data related to arrests, citations, warnings, and police department training and policies. FCPD will debut the new platform at a series of virtual town halls beginning on Nov. 18.

“We look forward to implementing this additional layer of accountability and leveraging data analytics to continue to strengthen trust and confidence in your police department,” FCPD wrote in a statement.

The department says the tool was designed based on community input.

“Our new GIS-based data dashboards were designed with input from stakeholders and we will continue to. Have healthy discussions with each of you concerning police policies and operations in all communities,” FCPD Chief Edwin Roessler Jr. wrote in a letter to the community on Oct.  16.

A renewed focus on FCPD’s operations is expected in early 2021 when a team of researchers from the University of Texas at San Antonio (UTSA) is expected to complete an academic analysis of FCPD’s data and its relationship to core operations today. 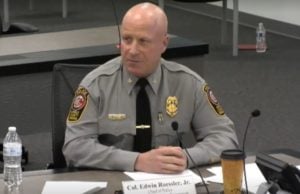 The review was initiated at the direction of the Fairfax County Board of Supervisors and the county’s Independent Police Auditor.

Researchers at UTSA are studying the department’s culture after a study released in 2017 found that roughly 40 percent of all use-of-force incidents involve a Black individual.

Across the country, similar conversations about transparency in policing have resulted in reform and additional policy directives.

Recent arrest data released by the departments shows some evidence of disproportionate policing in the county. The data indicate that Black individuals make up roughly 39% of all arrests last year. Black residents account for 9.7% of the total population.

In 2017, a study found that roughly 40% of all use-of-force incidents involve a Black individual.

Roessler Jr. says his department is grateful for “the additional layer of accountability” provided by the data sets and the ongoing academic review.

“Together, we shall continue to leverage data analytics to build trust,” he said.

FCPD plans to host virtual town halls with district station commanders to discuss training and policies related to the data sets. The complete schedule, including links to the meetings, is below:

All meetings will be recorded and released the public at a later date.