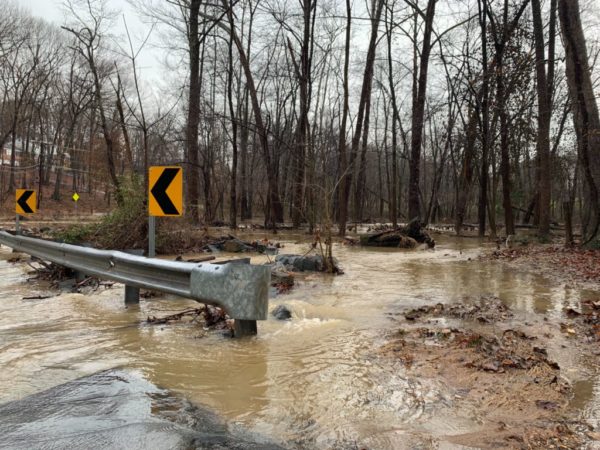 Flooding shut down two roads in the McLean area this morning.

According to the Fairfax County Office of Emergency Management, Rector Lane and Sparger Street off of Old Dominion Drive have closed to northbound and southbound traffic due to a fallen tree. Drivers should expect delays.

Old Courthouse Road at the Besley Road intersection in Tysons has also closed as a result of flooding from Wolftrap Creek, according to the Fairfax County Police Department. This is the second time in the past three weeks that Old Courthouse has closed at that particular spot because of flooding.

With rain falling throughout the day yesterday and into this morning, the Tysons area of Fairfax County was under a flood warning until 9 a.m. today (Thursday). The National Weather Service said to expect possible flooding in Vienna, Tysons, Dunn Loring, Pimmit Hills, and Wolf Trap.

The NWS reported at 8:12 a.m. that gauge reports indicated lingering flooding on Wolftrap Creek, but waters were receding, suggesting that flooding may end within the next one or two hours.

The Fairfax County Office of Emergency Management advised travelers to “avoid being near swollen streams.”

This morning, the NWS also issued a hazardous weather outlook for Fairfax County and the rest of the Washington, D.C., metropolitan region that remains in effect. Here is what the alert says:

This Hazardous Weather Outlook is for the Maryland portion of the
Chesapeake Bay, Tidal Potomac River, and adjacent counties in
central Maryland and northern Virginia as well as the District of
Columbia.

Flood Warnings remain in effect for parts of the Washington metro
area through this morning.

.DAYS TWO THROUGH SEVEN…Friday through Wednesday

Gale conditions are possible over the waters Sunday night.