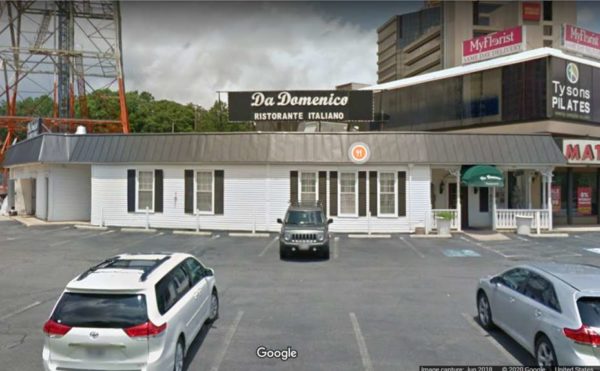 The COVID-19 pandemic has claimed another Tysons area restaurant.

Patch first reported the closure this morning after noticing a statement on the Italian restaurant’s website explaining that it has been unable to remain open “given the pandemic and its implications.”

Hussain says the property owner chose not to renew Da Domenico’s lease, which was coming to an end, and it was “tough” to stay in business with the challenges imposed by COVID-19, which has required restaurants to adopt a range of safety measures and restrict the number of customers they serve to enforce social distancing protocols.

Before it closed, Da Domencio had limited its operating hours to 5-9:30 p.m., though the website states that it had hoped to reopen for lunch soon.

Ongoing construction on Chain Bridge Road also contributed to the difficult decision to close, according to Hussain.

“There’s a lot of history attached to this restaurant,” Hussain said, noting that Da Domenico had garnered many loyal customers, including politicians and celebrities, during the nearly four decades it was in business.

Hussain says Da Domencio could reopen if he finds a new location, but for now, patrons can find the same Italian cuisine at its sister restaurant, Zeffirelli, in the Town of Herndon.

Zeffirelli, which Hussain also owns, has not encountered the same issues as Da Domencio and remains open, albeit with shortened, dinner-only hours.

Loyal Da Domenico patrons who visit Zeffirelli can get wine or a dessert on the house if they tell their server that they’re coming from the Tysons restaurant, Hussain says.